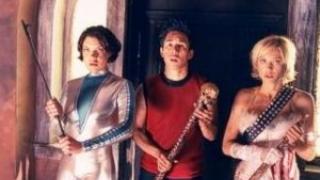 Anthony Mackie has been added to the cast of the long awaited big screen adaptation of Max Brooks' "World War Z". The cast already includes Mr. Brad Pitt and Mireille Enos and is set to begin filming this summer. Mackie is currently filming "Abraham Lincoln: Vampire Hunter" and 7 other movies, but I hope he gets some time to really drink the beauty that is Brad Pitt. God, I'd love to just get a lock of his hair or something. I've said too much.

Jane Levy looks like she could be anywhere between 11 and 30, but now she's been added to the cast of the teen Halloween comedy "Fun Size" so that means she's got to be a teen right? Is it creepy that I'm even bringing her age up? Little bit right? Are you uncomfortable? You should be! Anyway, the film focuses on a young girl who takes her little brother trick-r-treating, loses him and then spends the night trying to track him down before her mother finds out. I'm on some sort of watch list now aren't I... damn this site!

Do you love Godzilla? Well then you're sure to have lukewarm feelings about the new spoof "Notzilla: Duke of the Monsters"! Alright, honestly the movie, which already has Patrick Warburton and George Takei attached to it, looks like it could be funny for a half hour or so, but it's currently looking for distribution and the good people behind the film have put out a trailer to get some buzz going. If you have about 1.5 million it could be yours. Won't you help!? Won't somebody think of the children!?

Remember when seeing names like Tony Todd, Kane Hodder and Tiffany Shepis in a cast meant you were going to see a quality film? No, me either, but that doesn't matter because all three have been cast in the new werewolf flick "Hallow Pointe". The story takes place at a bed and breakfast where a couple must fight to stay alive when they find themselves checked in on the night of a full moon. I swear to god if I have to sit through another Kane Hodder sex scene I'm never watching another movie. You've been warned!

Kate Bosworth, Diane Kruger, Eva Mendes and Paula Patton are all reading for parts in the upcoming remake of "Total Recall". It's like some sort of weird twisted version of "m/f/k" (Google it) except there's an extra. Let's make the fourth "take a nice afternoon stroll". Feel free to post your picks in the comments.

Tiffany Shepis as a stem cell researcher? Sure what the hell. The movie is called "The Frankenstein Syndrome" and will go directly to DVD, shocking, on July 5th for your viewing pleasure. To celebrate this wonderful announcement there's also a new trailer for your peepers to enjoy of the science gone terribly wrong flick. I have confidence in Shepis and her medical skills though. Everything should turn out fine.

Ian McShane could come to my house, make a number 2 on my kitchen table, pee in my ice box, and I'd still high five him. Because he was on "Deadwood" and called more people c-suckers then I'll meet in my lifetime. And now Ian has been added to the cast of "Jack the Giant Killer", a horror take on the classic kids story. I'm speaking of course about "Green Eggs and Ham".

For those of you who have been patiently awaiting the big screen version of "World War Z" I'm about to toss some sand in your underthings. Word around campus is the when and if the film actually gets made it'll carry a PG-13. Of course if you're 11 this might be great news. But now that I think of it, if you're 11 please don't Google the m/f/k thing. No one should learn the birds and the bees from a guy like me.

Danish filmmaker Ole Bornedal is confirmed to be directing the Sam Raimi produced film "Dibbuk Box". The movie is apparently based on real life events that happened to a family who came into possession of a haunted box. I'm not sure how big the box was but one possible solution could have been to just throw it out. I'm just tossing out ideas here though.

Wait there's a remake of "The Crow" in the works? Why didn't anyone tell me about this? Time to bust out my skin tight leather pants! I hope they still fit, it's been over 15 years. Oh and Stephen Norrington, the director who was attached to it said he's left the project. But still, "The Crow" remake!

Now I'm going to address the fine people behind "The Frankenstein Syndrome" When you cast Tiffany Shepis in your movie I have some expectations of what I'm going to see. I'm not going to say what those things are but you take a look at these new stills from the film and try to guess. Here's a hint, it isn't a creepy mask covering up her face... or a creepy shirt.

Don Coscarelli, the guy who brought us "Phantasm" and "Bubba Ho-Tep", has officially been tapped to direct David Wong's "John Dies at the End". The cast right now also includes Paul Giamatti, Clancy Brown, Angus Scrimm, Chase Williamson, and Rob Mayes. I assume one of them will play someone named "John" who will most likely die at the end of the movie.

Did anyone other than Mark see "The Collector"? Follow up question, did anyone see it and like it? Didn't think so. Well news today that there's going to be a "Collector 3D" and it's going to be in.. well, 3D. You probably guessed that from the title though.

"She Wolf Rising" is not going to be a good movie but here's some pictures of Tiffany Shepis who stars in it rolling around. There's really not much news here but I think you'll appreciate it nonetheless. So uh, how's your week going? Some weather we're having huh?

So that whole unrated thing kind of backfired didn't it? Not to be outdone by Canada, "Hatchet II" has now been pulled from US theaters. But man those 2 days that it was showing sure were special weren't they? Did anyone get to see it? Tell me what it's like to love.

Take a look at this new picture from "Scream 4" and try to tell me you don't feel a little bad for Ghostface. It's him and a bunch of his other Ghostface friends riding a bus to school. But look, they're all sitting alone, none of them are friends. My heart is breaking. 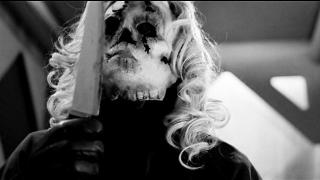