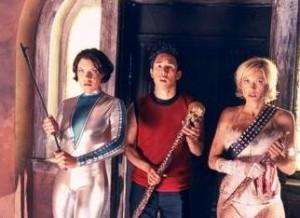 Spend days slogging your way through the "Teen Screams" section on Netflix like I just did, and a film like "The Hazing" comes as nothing short of a revelation. In a world where it seems like people have forgotten how to make "fun" horror movies on small budgets, it does everything right, for a myriad of reasons.

It starts out in the home of Professor Kapps, played with boundless enthusiasm by Oscar nominated actor, Brad Dourif. Kapps teaches a course on mysticism and mythology at the college, but what his students don't know is that he really believes the stuff he is peddling, and possesses evil powers granted to him by a mysterious tome. Brooke Burke, who we're supposed to believe is a college student, is there for a glass of wine and I'm guessing attempted sexual bribery in favor of a higher grade. Kapps has different plans however, and after dressing up in a delightfully silly robe, murders her in a ritual sacrifice.

We then jump to our main characters, a group of college aged men and women forced to go on a scavenger hunt to get into their fraternity/sorority of choice. There's the bimbo (played by "Serenity's" Nectar Rose), the sexy, tough chick (played, as per the law, by Tiffany Shepis), and well, a couple of dudes whose names escape me. Rest assured they fall into similarly stereotyped roles, all written in an appropriately knowing way.

When two of them sneak into Professor Kapps' house to steal the book as part of the scavenger hunt, they unwittingly discover his dark and murderous secret, and manage to hilariously kill him in the process, all by accident. It's a PSA in the perils of keeping sharp animal horns pointing upwards in your house, really. His soul freed from its earthly prison, Kapps flies (POV style) to an old mansion the kids have to sleep overnight in as the last part of their initiation. What ensues is a back and forth struggle for their lives against the good professor, his dastardly bag of tricks, and the few students unlucky enough to be possessed by Brad Dourif's lecherous soul.

After seeing this, it's hard to understand why the powers that be went through with an ill-fated remake of the 80's classic "Night of the Demons" last year. Mainly because, as I realized about halfway through, "The Hazing" is a pitch perfect remake of Kevin Tenney's film, nailing everything from the wacky violence, sexual situations, and the overall vibe with relative ease. They even rectify one of the biggest flaws of the remake, relegating scream queen Tiffany Shepis to a throwaway cameo role... by having her be one of the main stars here. It's as if they traveled forward in time, saw the remake, said "ya, that's shit", went back and fixed everything. I maintain my position that that's the most realistic explanation.

One of the cardinal sins in a low budget film like this is to slow down long enough for your audience to be reminded of your budgetary limitations. "The Hazing" has no such problems, whisking you through the fun first act with musical montages and quick bits of sex-comedy shenanigans. The "horror" sequences are highly stylized, filled with quick cuts and smoke machines galore. And if there's one thing modern horror needs more of, it's smoke machines.

There's no skimping on the nudity either, and although the film is filled with stereotypes and well worn horror cliches, it also goes to great lengths to play with the audience's expectations. For instance, the nerdy Asian guy gets the girl, and the "bimbo" has more going on upstairs than people realize. They're fun twists, and show you that the creative minds behind this film were working on a few different levels.

"The Hazing" will admittedly be hit and miss for some people. The humor may not land for everyone, and not every horror fan is enamored to the low budget side of the genre. For those who are, for those who troll Netflix for the elusive DTV horror flick that's watchable, give "The Hazing" a shot. You might just be surprised by what you find.