Are we doing this again?

if there's one thing no one can deny it's that supermodels can act the hell out of any movie. So the news that Abbey Lee Kershaw, who's 24 and doesn't look a day over 40, has joined the cast of "Mad Max: Fury Road" is just wonderful for all involved. Especially if the role calls for chain smoking and drinking black coffee. Cause ya know I think that's how models stay thin. I don't know, I'm 40 pounds overweight.

Danielle Harris has been confirmed for the cast of Adam Green's "Hatchet III". In related news I've been confirmed to be drinking myself into a stupor and bragging to my 9 month old daughter about how I was popular in High School this coming Friday night.

Everyone's favorite giant haired writer Charlie Kaufman has been tapped to write the big screen adaptation of the young adult novel "Chaos Walking". The book tells the tale of a future world where a strange virus makes all thought audible. I assume the outcome is a lot of men getting slapped and having drinks thrown in their faces. Just my guess.

Doug Bradley, who's loved by all for playing Pinhead and Roxanne McKee, who's loved by me for her hatred of wearing clothes, have both been confirmed for the cast of "Wrong Turn 5". I'm not going to bother going over the film's plot. There's a lot of cars and a lot of wrong turns. It's pretty much a given.

Its a smorgasbord of hilarious horror on this week's show.

The Chillerama Road show and Trailer!

Remember when Lars von Trier was just a guy who directed movies where people got bashed in the genitals with a ball-peen hammer? Now he's gone all Anti-Semite. I have absolutely no idea what that has to do with the new UK trailer for his film "Melancholia" but I thought it was a clever intro to the news. I thought wrong didn't I.

Remember the US remake of "Ju-on" AKA "The Grudge" a few years back with that broad from Buffy? No? It doesn't matter because they're making another one. For those of you not familiar with the film it focuses on a house that is all haunted and spooky and eff's with anyone who enters it. I can't imagine this one will be good either but I think 1 or 2 more versions of it and they'll really have something decent going on.

It looks like "Hatchet 3" has a director but it also looks like creator Adam Green is playing coy with details on who it is. Because ya know, everyone's chomping at the bit to know who's going to be taking the lead on "Hatchet 3". Just the other day I was on the bus and this young child was asking her mother, "Mommy, when will we know who is directing 'Hatchet 3?'' And then the young mother burst into tears because she didn't know. It was heartbreaking. I think at this point it's pretty obvious that I'm drunk.

I fancy myself a sarcastic prick but honestly there's nothing but magic in this little tidbit. Sony Pictures Animation has picked up the rights to the book "How to Survive a Garden Gnome Attack" and one Mr. Robert Zemeckis has signed on to producer the big screen adaptation. What better news? Reportedly the gnome slasher is going to be rated R. Mother of god are they handing out puppies at Port Authority today too?!

Comedian Patton Oswalt has signed on to the ever growing cast of "Odd Thomas" that already includes Anton Yelchin, Willem Dafoe and Addison Timlin. This also makes him the second name I recognize, the third I've seen nude and the first I'd like to sit down for a lovely lunch as Cici's with. That Timlin looks like she'd hog all the mac n cheese pizza, and that's Joe's favorite!

Paul Soter from the Broken Lizard comedy troupe that brought you "Beerfest" and "Super Troopers" is taking on the writing role for the upcoming film "Dr. Deth with Kip and Muffy". The movie, which apparently is based on some sort of comic book, tells the story of the good doctor and his two female partners who are the only hope against the cannibalistic mutants that run ramped in a post apocalyptic New Jersey. Insert your stupid Jersey Shore, Jersey smells or Jersey sucks jokes here. Then come to my house in New Jersey so I can punch you in the face and scatter your teeth upon this kick ass New Jersey soil.

Apparently "Hatchet 3" was announced a while back but I'm honestly not sure if I missed the news or just blacked out and erased the memory. But as details are released there's no denying it anymore. According to franchise creator Adam Green he's not sure he'll be writing or directing the third installment. He does intend for Danielle Harris' character to return, but is unsure if she'll sign on to the role. This isn't really news is it. He honestly could of said he intends the film to feature images that will somehow cure Polio but he can't confirm that either. I can't wait for this to drag on for at least a year. 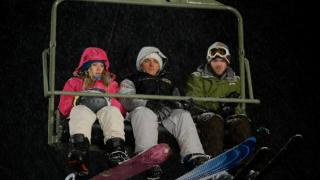