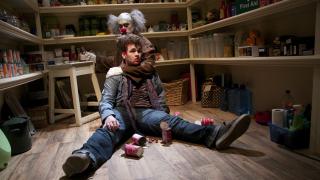 It's confirmed folks, "Star Wars" "Jurassic Park". I know it seems kind of obvious but Kathleen Kennedy has made it official by stepping down from the producer role on the fourth installment of the dino series in order to take on that role in the next "Star Wars" film. Han Solo battling a T-Rex. Now that's a movie I'd like to see.

Jason Clarke, of big old drunk in "Lawless" fame, is the latest name to be tagged to "Dawn of the Planet of the Apes". No real word on what role he'll play but I swear to god if there's a drinking monkey in this movie it will be my favorite film of the year.

Because it would kill me to go more than three days without some casting news for the new "Zombieland" series coming to Amazon here's some news about Kirk Ward being confirmed for a role. Ward will play one of the leads in the series, I assume based solely on the fact that he looks a lot like Woody Harrelson.

I don't know why you have to make a movie about a clown returning from the grave to bring vengeance on a group of kids that let him die but "Stitches" is just such a film. It's also a film that's been slapped with an April 1st release date on VOD and Blu-Ray. April fools day, I get it. Honestly though they could just show a bunch of real clowns sitting around drinking coffee and it would be scary as hell.

If you know one thing about me it's that I love... LOVE... Japanese Sci-Fi novels. I can't get enough of them. So the news that my all time fave book, "Tokisuna no Ou (The Lord of the Sands of Time)" is being turned into a big time movie. For those of you not as cool as me the book is about a group of people sent back in time to try to stop an alien invasion that wiped out the human race. Wait if they wiped out the human race how are the people alive to go back? Oh jeez ya got me, I have no idea what this thing is.

So last week we talked about how Sean Durkin had been lined up to do a new mini series based on "The Exorcist", telling the tale that leads up to where the first film picked up. Well it turns out that was a lie, or at least that's what William Peter Blatty, the author and rights holder of the story, says. And I'd guess he would know. But good news is he's got his own mini-series based on the novel that he's hoping to pimp out. So ya know, first sweet, then sour. They should make a candy based on this too.

"Monster Butler" sounds like it would be a laugh out lound romp but in reality it's about a real life serial killer/theif/bi-sexual con man. Not nearly as funny as a mutant that walks around a mansion serving caviar and crap. Dominic Monaghan and Gary Oldman have been added to the cast. Neither of them are funny though. This is the most un-funny post ever.

Conor McMahon's zombie killer clown flick "Stitches" has been picked up by the fine folks at Kaleidoscope Entertainment and Signature Entertainment for a Halloween release in the U.K. No news on when it'll hit these fine States so this one is all for your Brits. Let's call it even for that whole tea party thing.