We review the biggest practical joke of the Halloween season... 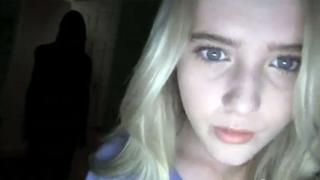 For those of you who have been waiting around for "The Healer", staring the creepy girl from "Orphan" Isabelle Fuhrman, I'm sorry to say it isn't going to happen. It isn't going to happen because the film, about a girl and her father who go camping to try to reconnect and find themselves in haunted territory, has been renamed "The Between". I'm sorry I toyed with your emotions back there. You look adorable when you're frightened though.

Why the hell anyone would want to see "Paranormal Activity 4" in Imax is beyond me but that isn't stopping the folks behind the film from announcing that the next chapter in the spooky camera series will find it's way to roughly 300 large screen on October 18th. They announced it because it's happening. I thought that was sort of implied though. Stupid.

Hey... HEY. Have you ever seen a found footage film... about weed? Well you're not going to see it here but we are going to the African outback with "Safari". If you couldn't have guessed the film is about a group of explorers who find themselves trapped in the desert with all the animals, heat and everything else that would make you wonder why anyone would ever want to go on a safari. You know they have a Safari ride down in Disney World right? There's literally 0 reasons you ever have to go to Africa.

I love the movie "Trollhunter" and I want Andre Ovredal, the director of said film, to sit on my face. Alright maybe that's a bit too far but god damn I love that movie so I'm super excited about the director's next project which is titled "Enormous". Based on the comic of the same name the movie will tell the tale of a world where monsters rule us all. I mean not all of us I guess, no monster is going to rule Brad Pitt. That guy is way too dreamy to be ruled.

Lots of headlines today screaming "Watch Audience Reaction for Paranormal Activity 4!". Put that through an honesty filter and it comes out as "Paramount wants you to believe this is still an 'indie' series and we're going along with them". So, all is normal in the genre press.

Daniel Knauf, the guy behind the HBO series "Carnivale", has hopped on board NBC's upcoming "Dracula" miniseries as writer and show-runner. I have not seen any episodes of "Carnivale" and will not watch a Dracula miniseries on NBC. So, not sure what we're doing here.

A real nasty clip from "Excision", starring Annalynne McCord. The film gets a release October 16th. No sarcasm here, this is at the top of my 'must see' list.

Check out a sales teaser for "Cabin Fever: Patient Zero". So apparently they're still making those, sure it's going to be great... (sarcasm has returned)

A glimpse into the "Prometheus" film that could have been... Between this and the conversation on our podcast about it, I am never going to be able to enjoy "Prometheus" again. Are you happy now?

Anthology films, they're so hot right now. Take "ABC's Of Death" a new one that has a short tale for each letter of the alphabet which has just been slapped with a January 31st VOD release date. Take it... I honestly have no idea how to wrap this up.

I've had a little soft spot in my heart for the big screen version of "Preacher" that's been in the works for some time now only because it's the only comic series I've ever read and I like to make annoying comments like, "Oh have you read that? It's a lot better in print form". But the thing has been in limbo for years and I had almost given up on it ever happening. But during a recent interview screenwriter John August dropped word that he really wants to see the film be made but "it won't be any time soon". Thought this was going in a different direction didn't you? Sorry.

Amazon studios still seems like some sort of weird joke to me but apparently it's a real thing and they make movies happen. They've just dropped that they'll be producing the film adaptation of the novel "Seed" which focuses on a family being terrorized by an evil presence that not only wants them to die, but die slowly. No word on director, cast or release date but rest assured you'll know about it as soon as info pops up, along with any new hot deals for your brand new Kindle Hello Kitty cover.

"Paranormal Activity 4" has been given an R rating for language and violence. We're all thinking it... booo no nudity. 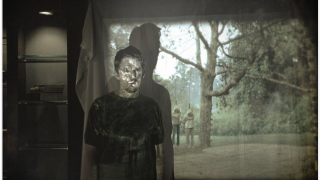 If you know one thing about me it's that I am a giant Greek mythology buff. Yes I know I've never mentioned it but I'm pretty sure you can tell just by looking into my eyes. They're so blue and dreamy. So the news that a film titled "Theseus" is in the works and will follow the zany antics of the warriors who battled and defeated (spoiler alert) the legendary minotaur has got me all in a tizzy. No real details are being released yet but Javor Gardev has already signed on to direct. Seriously check out my eyes sometime. You'll get lost in them.

I feel like I've written more about "The Exorcist" in the past month than I have my entire existence as a internet sensation. Granted I've only been the leader in internet content for about 2 years and during that time not much has happened so it kind of makes sense. So just to catch you up about a month ago a rumor was out that there was a tv show based on the film in the works. Then it came out that the show was BS but William Friedkin, who owns the rights to the story, was working on his own show. Now today he says that's actually crap too and the idea of a series based on an exorcism is awful. So now we're done with this. Until next week.

21 year old Matt Shively is the first name to be attached to "Paranormal Activity 4" which hits theaters on October 19th. He's reportedly playing the role of 'Alex' who I do not remember from any of the other films but honestly if I was forced at gun point to name anything other than "spooky ghost you can't see" I'd be dead right now.

Sigourney Weaver says James Cameron is going to shoot "Avatar 2" right along with 3 and 4 at the same time. In honor of this I will see those movies at the same time also. I'll set up 4 giant TV's, I'll toss in the original for good measure, and let the visuals blow my mind. I kid of course. I'm never going to watch those.