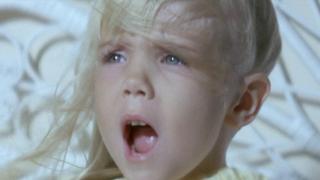 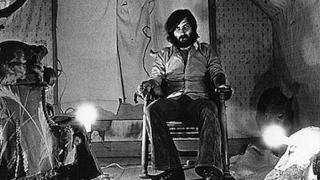 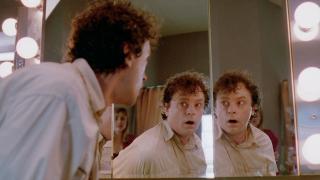 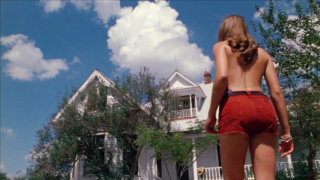 Yes there's a ton of found footage movies out there but have you ever been watching one and thought, "This is ok, but I bet the WWE could do it better". Well today's your lucky day because WWE Studies have picked up the rights to a new film titled "Bermuda". The flick will tell the story of a documentary film crew that goes missing after boarding a ship headed for the famed triangle of doom. Any sarcastic wrestling comment I make now will be based on what I remember from watching it 25 years ago and that'll just make me look old. So let's just move on.

A few weeks ago a 97 minute trailer for Tobe Hooper's "Djinns" hit the tubes and I'm not going to lie, I didn't have it in me to watch the entire thing. Well I got good news and bad news. The good news is there's a new trailer for the demon infested apartment flick that runs just under 3 minutes. The bad news is 75% of it isn't in English and there's no subtitles. I'm still going to call this a win though.

"Humans Vs. Zombies" might be the worst title for a zombie flick ever imaged but if you couldn't tell by the WWE story above it's kind of a slow day so let's pretend like this next bit is exciting. Hey awesome news! "Humans Vs. Zombies", "Boggy Creek" director Brian T. Jaynes' latest flick, will be hitting the DVD selves on May 8th. DVD and Blu-Ray will feature all kinds of extras and special comic book for your reading pleasure. Mother of god today is the greatest day of my life. Sorry first child being born day.

"Jack the Giant Killer", a movie about a guy named Jack who kills giants (I figured that out on my own) has had its release date pushed from June 15, 2012 to March 22, 2013. No word on why the push is happening but the movie stars Ewan McGregor and that guys accent is so thick that my best guess is that they're going to need extra time to dub over his every spoken word. Have you seen "Trainspotting"? You need the subtitles to figure out what the hell those junkies are babbling on about.

Lastly we're all giddy here at the BGH offices to hear the news that "The Last Exorcism 2" has found itself a director in the form of "This Beautiful City " mastermind Ed Gass-Donnelly. Need more exciting news? The filming for this sucker is going to begin next month. More?! Anyone who shows up to the set will be able to enjoy the Kraft services table for the entire time the movie is filming. Alright that last one is a lie, I got caught up in all the excitement.

Khalid Laith and Razane Jammal have both signed on to play roles in the upcoming Tobe Hooper flick "Djinn" which focuses on a couple who finds their luxury apartment is inhabited by some sort of demon type thing that plays tricks or something. I have no idea who either of these guys are but I would never admit that though because I'd be too afraid that it sounds racist. Oh boy, I've said too much. Really need to get that backspace key fixed.

On the heels of the release date for "Piranha 3DD" being pushed to a November 23rd Joel Soisson has been brought in to produce the flick along with fixing the script. I have no idea how you could screw up a script that probably goes something like "girl takes off top, fish eats girl, repeat" but what the hell do I know. Maybe throw in a "nude girl swims with other nude girl to weird music". Wait that's been done? I'll never make it in this town.

Your prayers have been answered my friends. A sequel to Tobe Hooper's 2004 remake of "The Toolbox Murders" is finally being made. The film titled "TBK - The Toolbox Murders 2" picks up right where the last film left off and I'm guessing involves a toolbox. Or maybe it takes places at this bar I went to one time called The Toolbox. But now I've said too much.

Movies about video games are usually pretty bad. So are remakes. But a remake of a video game movie? No way this can fail! Ladies and gentlemen I am proud to tell you that "Doom" is being remade. What could make this news better you might ask? What if I were to tell you that it's going to be in 3D? I'm sorry for just making you crap your pants with excitement but I'm sure you'll agree that it was worth it.

Michael Madsen and Rachel Hunter have been cast in Roger Corman's next film titled "Piranhaconda". The movie is obviously about a half piranha half anaconda that runs amok all over the place. According to everything I've read the movie will premier on Syfy sometimes in early 2012 but that can't be right, this has to be getting a wide release.

Brazilian actor Jose Padilha has been cast as the villian in Neill Blomkamp's next film titled "Elysium". The movie is Bloomkamp's first release since his much loved "District 9" and if I'm a betting man will feature a lot more waxing. Cause ya know, this Jose guy is Brazilian... They wax a lot? They can't all be zingers folks!

I could have sworn this already happened but apparently "Screen Gems" has acquired the rights to the big screen adaptation to the much loved video game "Devil May Cry". For those of your not familiar with the games there's a guy named Dante, a giant sword and some demons. That about covers it I think. Wait, no! There's a gun too.

Chris Sparling wrote "Buried", the best Ryan Reynolds trapped in a box movie of 2010, and now he's stepping behind the camera with a little ditty titled "Falling Slow". The film will focus on a couple, played by Mandy Moore and Rodrigo Santoro, who move into a haunted apartment. If I was a betting man I'd say any movie with someone named Rodrigo in a starring roll is going to be 100% caliente.

Tobe Hooper, who I believe created a low budget rip off of that chainsaw flick that came out a few years back, has been confirmed to direct a new supernatural thriller titled "Djinn". Djinn is apparently some sort of Arabian demon and I guess in this movie that demon does some nasty crap to a couple's apartment after they return from their trip to the US. I'm not positive but it sounds like this movie might not be patriotic.

What's more prestigious than making a crappy Syfy flick? Making the 200th crappiest Syfy flick of all time! Well the new After Dark opus "Scream of the Banshee" will have the honor on March 26th. That's all really need to know but if you're looking for plot just think banshee scream, then you die. That about covers it.