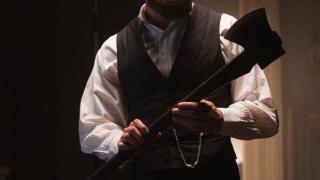 I don't care how many love children Arnold Schwarzenegger has had, I want to see him in "Terminator 5". Burn an American flag while your soon to be ex-wife cries in the corner for all I care. But now it looks like Arnold is putting his comeback on hold because of his recent troubles with putting his bim bam inside the maids poom poom and we'll all have to wait to see him return as the great robot one. Be straight with me, "Last Action Hero 2" is never going to happen, is it!

The Israeli slasher flick "Rabies" is all the rage with the kids and now that it's been picked up for US distribution there's a new English version poster out on the town for viewing. Of course I have no idea what makes it an English version. There's no copy other than "Rabies" on it. Is that super English? Anyway the film is about a psycho who's loose in the woods and encounters a group of teenagers. In English!

The Jim Mickle directed vampire hunter apocalypse flick "Stake Land" has finally received a release date and the even better news is I'm going to tell you it. Get ready. Are you ready? It'll hit DVD and Blu-Ray on August 2nd! Kind of anticlimactic isn't it.

TV horror shows don't usually end up working out too well, I'm still waiting to find out who the killer was in "Happy Town", but god bless those nutty TV people because they keep trying. "The River" from Paranormal Activity creator Oren Peli has just picked up by ABC and now has a full trailer. The series will follow a family who goes into the Amazon to find their missing loved one who also happens to be a popular animal show host. If I was a betting man I'd put my money on the show being canceled before we find out what happened to him.

Zombieland? No, STAKE LAND, you dumb bitch! With the exception of the stupid tagline-- “A road movie...with teeth!” -- I think this might be cool. But, seriously, what is the deal with vampire film promotions and the use of the cliches “...with teeth!” or “...with bite!” Do you think that, the PR people, when sitting around in their offices, shooting wads of paper into a waste-basket with a basketball hoop over it, stumbling over one tagline after another that doesn't work, when they hit upon the “teeth” thing they high-five each other and snort coke off each other's balls in a celebratory circle-jerk because they think that they are the first ones to come up with it? They probably do.

Amy Heckerling, the has-been director of “Fast Times at Ridgemont High”, “Clueless” and some other shit, has signed on to direct the vampire romantic comedy “Vamps”, about “two young female vampires living the good life in New York until love enters the picture and each has to make a choice that will jeopardize their immort....”, oh shit, sorry, I just got my period all over the place. And on the day I chose to wear white pants!

Notorious schillers Bloody Disgusting have proclaimed that no-hit wonder Richard Kelly's “The Box” is “sure to deliver in more ways than one”. I learned this after trying to figure out how to close the annoying, full-screen roll-over ad for the damn movie, with absolutely no success. I ended up just opening another window to look at another site as the trailer continued to screen without any hope of skipping it. I think that, right now, we should all get on our knees and thank Eric and Mark for creating a website with no roll-over ads, pop-up ads or reviews based on how much the advertisers pay us. On the other hand, DRINK PEPSI, THE CHOICE OF A NEW GENERATION!