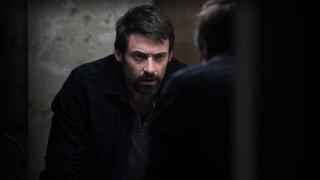 I got Feldman fever folks! And the cure right now is some new stills from his upcoming spooky new supernatural flick "Six Degrees Of Hell". I'm not sure I would be talking about the movie if Feldman wasn't in it but if you think about it I wouldn't be talking about Feldman if he wasn't in "Dream a Little Dream". Did I just mind F you so hard that you need a cigarette?

Let's be honest there's no real reason we should be covering "Real Steel" on this site but the fact that the movie stars Hugh Jackman as a father trying to bond with his son by fixing up a fighting robot means I will give this thing more coverage than "Scream", "Nightmare on Elm Street" and "Friday the 13th" combined. It's that important. And today there's an adorable new Brazilian poster for the film that has Jackman looking like a dream boat while two robots fight. My heart has never felt this kind of warmth.

"Straw Dogs" has officially shot it's way to the number 1 spot on my list of most un-needed remakes. But it's happening and today there's a couple new clips from the movie that hits theaters on September 16th. For those of you who don't remember the original it stared Dustin Hoffman as man who moves to a small town with his wife and begins being terrorized by some local workers. Things get uncomfortable... in a "Last House On the Left" sort of way.

Indie zombie flicks are usually about as fun as... well indie zombie flicks but every once in a while you come up with a winner. I can't think of any off the top of my head but I'm sure there's one out there. Was "Shaun of the Dead" indie or just British? Anyway "Extinction: The G.M.O. Chronicles" is indie and by god it looks pretty decent. At least the zombies do. I don't know, watch the trailer and shut your face.

If the makers of "Real Steel" are right then we're just 9 short years away from robot boxing being the biggest sport in the world. I for one can not wait. In the meantime we'll have to settle for the new interviews/trailer for the Hugh Jackman flick which is set for an October 7th release. The excitement is more than I can handle. I hope I can sleep between now and 2020.

If you're like me then for some odd reason you still insist on watching the MTV Video Music awards even though the channel hasn't played music for years and you've reached an age where the performers both frighten and confuse you. But this year the rest of you might have a reason to watch now because it looks like they'll be airing a special first look at "The Hunger Games". Of course the fact that they're choosing the same outlet to premier this as they have for the "Twilight" films might be a bad sign but let's hope not. Let's also hope that Lady Gaga keeps her man-ass covered for the night too.

I've always kind of thought that Dennis Hopper was probably just like his character from "Blue Velvet" in real life. At least I like to think he was. And as a fellow hater of warm beer I'm happy to report that the David Lynch classic will finally be getting the Blu-Ray treatment on November 8th. No details on specs yet but it's the 25th anniversary edition and they wouldn't screw you over with that would they? Would they?!

I have no idea who the hell Damien Chazelle is but he's been tapped to write the script for the upcoming sequel to the BGH favorite "The Last Exorcism". What this means I don't really know but he's got an evil name so that's got to be good right? Then again his only writing credit is something called "Guy and Madeline on a Park Bench" so that's a bad thing I think. Unless you're into smart people movies then you probably own that one. You fancy now.

Hugh Jackman may be looking to turn in his claws for a set of torture tools as rumors start to leak that he is now attached to the upcoming thriller, "Prisoners".

Clive Barker is back behind the keyboard again, this time with a new short story collection titled "Black is the Devil's Rainbow: Tales of a Journeyman".

Michael C. Hall sits down with Entertainment Weekly to discuss The series finale of "Dexter" as well the future of the series.