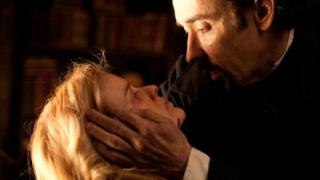 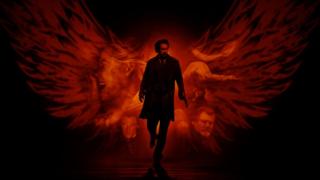 Posters: "The Raven" is still a mystery to me

You know what? It's Friday. I'm just going to go ahead and set your day on edge by making you watch this clip from "Predator: The Musical". You can thank me later.

Well it's about time. Lance Henriksen is writing an autobiography titled "Not Bad For a Hum". It's going to be published by comic scribe Steve Niles over at his Bloody Pulp Books imprint too. Finally, somebody besides Lance and myself think Lance is awesome enough to warrant an autobiography! For full details, be sure to visit the official site for Not Bad For a Human

Speaking of Steve Niles, this guy's on fire! According to a recent post at his website, the writer has announced he will be penning a comic version of "Nevermore", the one man stage play based on the life of Edgar Allen Poe that stars Jeffery Combs! Combs will be involved in the comic as well, so this will be one to watch. Well, one to watch if you're a Poe/Comic nerd like me.

This year's Saturn Awards nominee's are in and there's a fair share of genre flicks getting the nod this year. Among them are "Let Me In" and "Shutter Island" landing nominations for Best Horror Film, "Splice" for Best Science Fiction and "Twilight Eclipse" for Best Fantasy Film! Oh wait... should have read that list all the way through. At any rate, there are plenty of good horror films being nominated, so check out the full list at the Saturn Awards Site!

Since we're talking awards and I'm known around these parts as our official "P.R. Bear", I'd be remiss if I didn't take this moment in the spotlight for a reminder! The Bloody Good Horror Podcast has been nominated for a Rondo Award in the Best Horror Audio category! You should head over to the Rondo Awards site and cast your ballot for your favorite Podcast that's hosted by five guys named Eric, Mark, Jon, Joe and Casey! Not that I'm telling you who to vote for or anything...

How the hell is there already a trailer for "Pirates of the Caribbean: On Stranger Tides"? Did it just get announced a couple weeks ago? maybe I'm wrong. But anyway this one looks very promising my friends! There's 0 Orlando Bloom's and countless zombies. Johnny Depp's dreamy pools of seduction he calls eyes and... zombies. I smell a winner here.

Here's another shot of John Cusack as Edgar Allan Poe in the upcoming film "The Raven". John looks legit but what is wrong with that freakin bird? It's got devil eyes! I don't trust that bird, it wants to snatch my soul and take it back to it's bird house and feed it to it's little devil bird chicks. We should move on.

With season 5 of "Dexter" in the books it's now time for Julia Stiles to look back and reflect on her season long run with everyone's favorite serial killer. For those of you who haven't watched the final episode yet don't worry, she doesn't spoil what happens.

Hey here's something awesome to kick off your Tuesday. It's three pricks who are taking your childhood memories and taking a big old crap on them. Some might also call it a video with the three guys that MTV has cast in their new "Teen Wolf" series. I like my description better though.

Mike White, who is apparently a director, has been chosen to make the moving pictures for the big screen adaptation of "Pride and Prejudice and Zombies". Now before you go thinking this might be something to get worried about let me remind you that Mr. White wrote "Nacho Libre". So that's something, right?

Is this true? Pang Ho-Cheung's "Dream Home" is the first Japanese slasher flick? How the hell is that possible? What have they been doing for all these years? Dressing up like giant hamsters and having sex with each other? Oh wait, that's probably it so don't laugh. Don't laugh!

And here's your first look at John Cusack as Edgar Allan Poe in "The Raven". Spoiler alert, it looks like John Cusack with a goatee and one leg. Alright the one leg thing is a lie but I figured the goatee wasn't really much so I spiced it up a bit. I'm sorry I hurt you like that.

Not content to rest on his laurels, Tom Six has already begun filming "Human Centipede: Full Sequence". Per Six, they plan to finish filming by December and have the film in the Sundance Film Festival by January.

Neil Marshall is going to take you out to eat for his next film "Underground" as he explores the world of cannibalism and exclusive supper clubs. With Marshall's track record, I'll just go ahead and assume this flick will be alright.

John Cusack's going to play a troubled writer! Glad to see he's trying something new, right? This time around, it's not just any old troubled writer; Cusack's been cast as Edgar Allen Poe in an upcoming biopic. Don't worry film makers, we can just forget about genre veteran Jefferey Coombs who's been playing Poe on stage for the last two years to critical accolades.

James Cameron thinks that movies like "Piranha 3D" cheapen the 3D medium he worked so hard to breath new life into. I'd like to remind Mr. Cameron that he's the reason every damn movie coming out lately is trying to shoehorn 3D into it's tag lines. That, and I guess he forgot directing the original 3D "Piranha" film?