If you're in the market for a new home and happen to have $2.1 million sitting around then why not move into the house from the original "Nightmare on Elm Street" film? I know what you're thinking though, West Hollywood, right? Who wants to live in California? Everyone is so damn annoying there, right? And all that traffic? Plus it's full of people from California. Well it does have a guest house also so maybe that outweighs all that other stuff.

If you don't like Colin Farrell then you're a jerk. There I said it. He's so damn charming I just don't get why anyone would dislike him. I bring him up because he's joined Anthony Hopkins in the cast of "Solace", a new flick about an FBI agent who reaches out to a retired psychic to help him track down a murderer. I could understand why you might not like Hopkins though. He comes off as kind of snooty.

Jocelin Donahue, who you might remember disliking after seeing "House of the Devil" has signed on to the cast of "Insidious: Chapter 2". She'll play a young Lorraine Lambert in the film, who I don't particularly remember from the original film but I'm going to go out on a limb and say she was a relative or something of the main characters and spooky stuff happened to her.

Blah blah blah Guillermo del Toro is doing another movie. It's going to be a new version of "The Secret Garden". It's about a garden that's secret and then all kinds of crazy del Toro stuff happens and we all go whoooo and then I ask where the hell the new "Haunted Mansion" movie that he's been talking about for years is.

A few moons ago there was a rumor on the tubes that the fine people at universal Pictures were planning a sequel to the 2010 remake of "The Wolfman". Since that movie was horrible it sounded like a terrible idea. Now it looks like they're just scrapping the entire thing and doing a full on reboot that will go straight to DVD sometime next year. There's no way this can end well but I guess it can't do worse than shirtless Anthony Hopkins.

If you love things that are good, and if you don't I suggest you stop reading my news because you're going to hate it, than you're going to be tickled pink by the news that "Tucker and Dale Vs. Evil" has been picked up for distribution by the folks at Magnolia Pictures. Looks like the buddy horror romp will hit VOD on on August 26th and see a limited theatrical release on September 30th. So that's awesome news if you haven't already downloaded it from some virus filled site.

Get ready to get excited, kids! The first shots of season 2 of "The Walking Dead" are hitting the nets and they're chock full of zombie goodness. Namely some bloodshot eyed zombie women that I find strangely attractive. These are all such strange new feelings for me. While I try to figure this all out you can sit there and diddle yourself over the fact that season 2 will hit AMC this October.

"Do you have Asteroids?", "No but my dad does". Name the movie! Anyway it looks like Roland Emmerich, the guy who directed "Universal Soldier" and "Independence Day" might be locking himself in to do a big screen adaptation of the beloved 80's video game. I'm so confused by what I just wrote I don't even know how to be sarcastic about it.

The Inspiration Behind "The Rite" 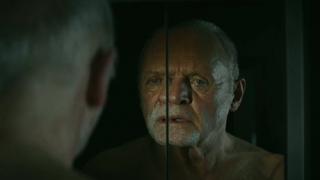 Anthony Hopkins crusty face is the scariest thing in this film. 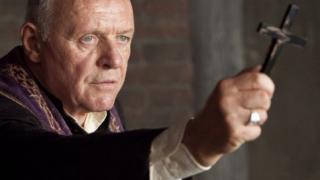 James Wan and Leigh Whannell are the duo that brought you "Saw" and now they've got a trailer for a new film called "Insidious". It's a heartwarming tale of a kid that lives in a house that's having all kind of weird haunted type stuff going on in it. Here's the catch though, it's not the house that's haunted, it's the kid! Dun dun duuuuun!

Last week we talked about our feelings and the fact that there might be an Alfred Hitchcock biopic in the works. Well now we can chat again because there's rumors that Sir Anthony Hopkins is the front runner to play our favorite rollie pollie horror icon. We should also make childish comments about the name Hitchcock and giggle like girls.

"The Silent House" is a movie from Chris Kentis and Laura Lau, the peeps who brought you "Open Water" and today the film's got a clip up on the tubes. Doesn't look like too silent of a house to me! Get it? Cause of the title? It's a pun... or a play on words... or a poem. I don't know.

Is there a video game version of "The Walking Dead" in the works? The world may never know! Wait no, that's wrong. We'll know, we'll know on February 17th when game developers Telltale announce their new big game that's based on a "a just-launched property from the TV and comic book world whose popularity is changing life as some know it." It really could be anything!

Director Neil Blomkamp is gearing up for his "District 9" follow up by getting Jodie Foster to climb aboard "Elysium". Little is known about the film's plot other than it takes place on a distant planet in the far future. Ms. Foster will be joining Matt Damon and Sharlto Copely, so at least it looks promising.

Anthony Hopkins is preparing to try and creep us out once again with his upcoming supernatural church thriller, "The Rite". The marketing machine is starting to spin up, so be sure to check out the new TV spots and posters at the link.

Franz Kafka's literary classic "Metamorphosis" is finally being brought to the big screen by a whole bunch of people you've never heard of!

Here's a gang of new shots from Anthony Hopkins' new film "The Rite" which comes out on January 28th. The film revolves around a skeptical student at an exorcism school and features the most disappointing panty raid you've ever seen.

Now sit down kids and I'll tell you about how video games used to be played on the PC and were mostly just a lot of pointing and clicking. And by far my favorite of the genre was "7th Guest" which will be landing on your iPhone and iPad in the near future. Of course I never saw a reason to have an iPad until now and I refuse to pay for one just to play a 20 year old game, but still, this is awesome news.

Joe R. Lansdale, the guy who wrote "Bubba Ho Tep" among other things, will see his heartwarming zombie story "Christmas with the Dead" made into a movie sometime next year. Yet more proof that if you wait long enough you'll never have to read another book again.

Here's a trailer for the Swedish ax murderer flick "Blood Runs Cold". Apparently the film was shot on a budget of just 5k, but honestly it looks so good you can hardly tell. Which is a bummer because I wanted nothing more in this world than to make some sarcastic comments about the Swedes. You win this round!