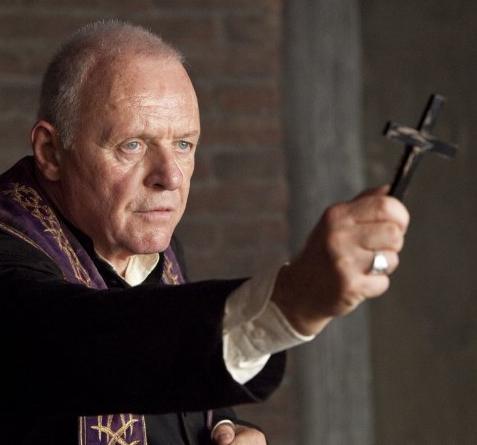 Exorcism films can take one of two perspectives: the first, and more common, is that of the possessed. Here films such as "The Unborn" or "A Haunting in Connecticut" establish a connection between the audience and an individual suffering at the whims of ungodly and unknowable forces. This perspective allows us access to the fears and pains of those most directly affected. The other option is to tell the story from the vantage of the savior. "The Last Exorcism" recently succeeded with this formula by crafting the film around a disaffected and non-believing pastor who wanted to pull back the curtain and reveal exorcism for the shenanigan that it had become. In these films, the tension comes from the conflict surrounding the exorcist, usually crises of faith combined with self-doubt and fear for the afflicted.

"The Rite," from director Mikael Hafstrom, falls very firmly into the latter camp, and this choice sets the stage for the film's consistent failure from the outset. Michael Kovak (played by non-descript young actor), a priest in training, decides to leave the seminary when he's talked into taking an assignment at the Vatican's special exorcism training course. Exorcism requests are on the rise across the world, and the Catholic church needs to match supply with demand. Despite the fact that he is all but ready to leave the church, Michael accepts this challenge and heads for Rome. Once there, he continues his doubting ways -- even going so far as to suggest that an exorcism request should be met with a psychiatric evaluation. His teacher, amused at such ludicrous ideas, suggests that Michael go one step further in his training and meet Father Lucas (Anthony Hopkins), a wizened old exorcist with "unique methods."

It's only after Michael comes under Lucas's tutelage that the demonic crazy really ramps into high gear. The duo meets a pregnant teenager -- raped by her own father -- who is now also possessed by a demon (when it rains it pours, the church might say). Father Lucas has been "treating" her for several weeks, and meeting with only minimal success. While Michael continues to doubt, his own experiences, including those with a possessed young boy, begin to converge on evil with greater and greater frequency. Lucas also seems to be descending into his own macabre problems. Though the film generates some concern that Michael may not survive his trip to Rome, it's notable how little his well-being is ever really threatened. Others around him continue to suffer a great deal, but the filmmakers seem to view these souls only as a guide for Michael's own crisis of faith.

"The Rite" does manage to work in a female character -- not a love interest as such -- Michael is a priest after all. Angeline is a reporter, and once she and Michael team up, they begin to unravel the demonic undercurrents of many of Michael's experiences. This all culminates with a final showdown at Father Lucas's rotting apartment building. This sequence is the raison d'etre for the entire film: a fully possessed Anthony Hopkins, letting fly with all he's got. The only issue is that the ammo he's provided barely crosses the line into PG-13. The "demons" that haunt Michael and Angeline's past, which convention tells us will be used against them in the most vile way by the possessed, are so mild as to not even induce a wince. Among the worst invectives Hopkins's demon can muster is that Michael may want to have relations with his reporter friend. Well, golly! That's just uncalled for!

Contrast this with Linda Blair's profane and brilliant performance in "The Exorcist," or even the tamer yet still unsettling possession sequences from "The Last Exorcism." Demons like these push the boundaries, laying waste to sacred religious ideals and social norms both. "The Rite" meanwhile, exists in a world that is much more narrowly focused on the questions of the Christian religion, and Catholicism more specifically. The film pulls in more tightly on the exorcist and the beliefs and rituals that underpin it than is perhaps necessary, and because of this things like tension or subversive possessed behavior take a firm backseat.

"The Rite," not quite unwatchable, does move along at a decent pace, though it unfortunately never truly establishes a compelling voice of its own. The film is far more reverential and exalting of Christianity than any of its recent predecessors, and set as it is in Rome, it at times seems to exist in another dimension where religious questions trump all Earthly matters. This feels nothing like the world as it actually is, but who knows, maybe that's just Italy. The sad truth is that in a movie world post-"Exorcist" or even post-"Last Exorcism," "The Rite" does nothing of interest -- it asks no new questions, presents no new dilemmas, unveils no new truths. Even Hopkins, who does make a couple of attempts to really crank up the crazy never truly musters the unsettling performance the producers bank on in all the promotions. As far as exorcisms go, "The Rite" would have done well to better embrace its demons.