The nautical chaps over at Anchor Bay have picked up the rights to "The Demented", a new flick about a group of friends who find themselves under attack by rabid townies while on vacation. I assume there will be nudity.

Two years Guillermo del Toro ago dropped that he would be working on a new big screen version of my beloved Disney ride "The Haunted Mansion". I wake up every morning hoping there is news on the project but alas, there has been none. Until today! D-Tors dropped knowledge that he has in fact handed in a draft of the script and is awaiting feedback. He very much still wants to make the film and may even direct, he was originally slated to produce and write. It's hard to explain just how excited I am about this. I throw up every day I get so excited.

Remember that guy from "The Loved Ones" who got kidnapped and all kinds of messed up? I mean he's the main character so if you don't remember him then something might be wrong with you. Well his name is Xavier Samuel and it looks like he's joined the cast of "Plush" about a singer of a band, or something, that gets caught up with a new guitar player who is a prick, or something. Honestly I don't get the plot and it sounds stupid but hey. "The Loved Ones" was pretty cool so let's get excited.

So here's a movie called "Strip Mahjong: Battle Royale". If you couldn't have guessed it's a Japanese flick and if you don't know what Mahjong is it doesn't really matter. The movie is ridiculous. And it's going to be awesome. Watch it, now.

I had no idea there was a "World Of Warcraft" movie in the works or that Sam Raimi was suppose to be directing it. But it turns out he isn't going to. The movie is still happening though, just with another director. Good story huh?

I don't have proof or anything but if I was to take a guess I would say that at some point Eric Roberts has been spanked by a lady. Don't ask me why, it's just a hunch. So I suggest that ladies on the set of "Self Storage" keep a close eye on their drinks because the tan one has just joined the cast. The film tells the tale of a group of friends trapped inside a storage facility when all hell breaks lose.

If you like cartoons and you like horror then your going to go ape shit over "The Living Corpse", which the folks over at Anchor Bay have just acquired the rights to. The flick is a cartoon tale (that's why I mentioned them before) about a superhero who also happens to be undead. Like superman, but he eats people. Although Superman may be doing now also. I haven't read a comic in close to 20 years so I don't know what's going on there.

Remember Justina Machado from "Six Feet Under"? The spicy latina that Rico cheated on and we all fealt sorry for? Well feel sorry for her again because she's landed a role along side Halle Berry in a new serial killer flick "The Hive". In the film Berry plays a 911 operator who must help a teenager being stalked by a killer. I say feel sorry for her because Halle Berry kind of makes crap movies now. So this is probably going to be a crap movie. She may have a perfectly lovely time though. I'm sorry I lead you to believe she was going to be miserable. She's hot.

If you liked "Rise of the Planet of the Apes" then get ready because it looks like the writers have a trilogy in mind. Or have always had in mind. How quickly they decided this after the film made a boat load of money no one knows but let's pretend it was always the plan. That makes it nicer.

It looks like the long awaited sequel to "The Wicker Man", the original not the Nic Cage masterpiece, titled "The Wicker Tree" will hit theaters in early 1012 thanks for the good people at Anchor Bay. The sequel tells the story of two newcomers who come to Scotland only to run into a strange group of religious fanatics. I hope they wear weird animal head dresses again.

Showtime is pushing the "Dexter" promos so much you'd almost think season 6 isn't still a month and a half away. But anyway there's a new poster for your peepers to view and it's crafty because it's got Dexter with a bunch of blood behind him. But wait, the blood looks like wings. You just mind f'ed me lonely designer who spent hours on this and 74 other posters only to have some jackass on a horror website mock it. I'm so sorry.

Good news America. It looks like Tom Six will be setting "The Human Centipede 3" in the good old U.S. of A. Wait, it gets better. According to Six the third installment will make the second look like a "Disney film". I love Disney films so I can't wait for the second, which will see a limited release in the states on October 7th. Disney films and America? I believe you have warmed your way into my heart Mr. Six. 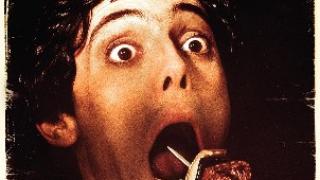 "Happy Birthday To Me" on DVD, With Original Score?