This week we talk about the latest film from Hammer studios, bearded night intruders, and Hilary Swank's controversial hotness.

I'm like a little school girl for the movie "Priest" and the new trailer has got me all in a tizzy. I'm flustered, light headed and I think I may of started menstruating. Wait there's vampires in it? Oh man I'm going home pregnant!

The problem with being awful with names is that every time you read a headline about some guy's next film you get kind of excited. So when I read that David Ellis' next flick is going to be "The Briar Lake Murders" I got interested. Then I found out David Ellis is the guy who directed "Snakes on a Plane" and I realized this news is useless. So don't bother reading it.

Here's the new trailer for Hammer Film's "The Resident". What did I learn? Well Christopher Lee is still alive so that's nice. What was confirmed? Hilary Swank is in fact a man, which is not very nice. It's not very nice at all is it.

Just days after Joe Johnston admitted that "The Wolfman" kind of sucked there is now talk that the film could be up for an Oscar. Now before you go renting a tux I should point out that it's for best makeup which to be fair "The Time Machine" remake was nominated four years ago and only one person in the world liked that. If you promise not to keep it I'll let you borrow the DVD.

As expected Sunday night's "The Walking Dead" season finale went balls out with the rating, pulling about 8.1 million viewers between the 10 pm and 1 am showings. That's up 9% from last week's show and the series had the highest average for a cable show since 1993. That's a lot of math and to be honest the most amazing part is that I somewhat understand it.

It's no surprise that the producers of "American Psycho: The Musical" are promising tons of gore. Well maybe it's a little surprise since it's going to be on Broadway but that's nowhere near as surprising as the fact that Tom Cruise might be making a small cameo in the show. I know this isn't sarcasm but somehow I still feel like I'm being a wise ass here.

Nicolas Cage and Ron Perlman, I've had dreams that start with those two names. Nightmares, I meant nightmares... I swear! Anyway there's a bunch of new interviews with the two up on the tubes with them talking about how exciting their new flick "Season of the Witch" is. Get hot and bothered!

Hammer's next film titled "The Resident" will apparently not be released in theaters but instead see a DVD/Blu-Ray release on March 29th, 2011. My guess for the change in plans is that putting both Hilary Swank and Jeffrey Dean Morgan on the screen together would cause theaters to burst into flames from all the heat. Now it'll just be your home.

Good news kids! I think at least. "The Howling: Reborn" has been picked up by Anchor Bay for all English speaking territories. So congrats America and Britain. See you in hell, France.

Here's another clip from "Skyline" which hits theaters this Friday. It features a giant robot shooting laser beams out of its eyes and destroying all of the west coast. No I'm kidding, it apparently it has some spoilers in it so I didn't watch. Man wouldn't it be crazy if I was right?

Hammer Film's "The Resident", starring America's most handsome sweetheart Hilary Swank will finally see the light of day now that Image Entertainment has picked up the US distribution rights. Swank plays a you doctor who lives in a Brooklyn apartment that might be haunted. I'll star as the guy in the audience who keeps leaning over and asking his wife why people like Hilary Swank so much.

A gaggle of new pics from "Paul" starting Nick Frost and Simon Pegg have popped up online and I just threw up with excitement. Seriously, it's all over the laptop, it's awful and I think I may have ruined the thing. If this is my last news update ever I want you to all know I love you. 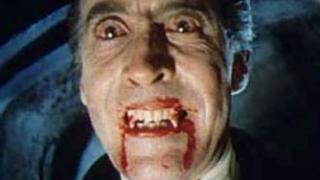