"Watchmen" writer Alex Tse has been picked up by the fellas at Relativity Media to pen the long delayed remake of "The Crow". For those of you who weren't fortunate enough to be a part of the madness that was the original 1994 flick, it starred Brandon Lee as a man who comes back from the dead to avenge his and his fiancee's murder. Brandon Lee also died on the set... and the movie sucked... and it pretty much created Hot Topics. Can't wait.

For those of you out there who were actually excited about David R. Ellis’ "Shark night 3D" I've got some bad news for the 7 of you. The shark attack camp out flick has been slapped with a PG-13 by the folks at the MPAA. Just so we're clear PG-13 means no nudity, minimal swearing and most importantly absolutely no fun whatsoever. Boo this man!

Looks like the Miami Metro Police is getting itself an intern in the form of Josh Cooke. Cookie (new nickname I've just decided to give him) will join the cast of "Dexter" for season 6 which is currently ramping up for production. Sir Cooks A Lot will play a new addition to the team and apparently become buddy buddy with creepy bald Asian, Masuka. I smell romance! 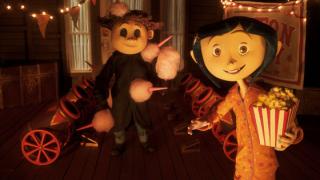 Here's the teaser for Park Chan Wook's vampire film "Thirst". I have no idea what's going on since it's in Korean but people seem excited so I'm just going to go with it.

The guy who wrote "Watchmen", David Hayter is going to direct a werewolf thriller called "Slaughter's Road". No real details as of yet, but Thomas Dekker ("The Sarah Connor Chronicles") and Ray Stevenson ("Punisher: War Zone") are in talks to star.

AICN has the first look at "Goon", the CGI adaptation of Eric Powell's comic book of the same name, being produced by David Fincher. I've never heard of the property but it looks pretty sweet to me.

I'm sure this movie "And Soon the Darkness" is about something. Personally, I stopped reading after "starring Amber Heard and Odette Youstman". What are they trying to start the apocalypse? Do they sincerely thing our pea-brains can handle all that hotness on one movie screen? 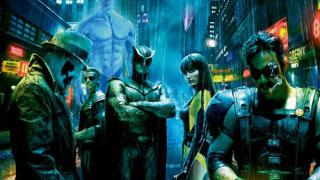 Who watches the Watchmen? I do!

April 16th, 2010. That's the date that Platinum Dunes plans to release its "Nightmare on Elm St." remake. So, now you know.

Here's the trailer for Jake West's Indie film "Dog House. West's last film was "Punpkinhead 3" for the Scifi, and before that he directed "Evil Aliens". The story of "Doghouse" concerns a group of friends who take a vacation to a small town in the UK, only to find out that all the town's females have been infected with a virus, which based on what I saw in the trailer turns them into zombies.

I think I could get into an adaptation of this "Ghosts/Aliens" book. It's literally about "two pothead friends who set out on a question to discover both ghosts and aliens". It just got picked up by Paramount Vantage, and along with a feature film version, Comedy Central will be prepping a television show based on the property.

Wes Craven describes the villain in his film "25/8". He says he's: "a figure who lives under the river, sleeps under the bridges... eats bark". And there we have it, the secret of his anger. You'd be killing people too if you had to eat bark. That's just nasty.