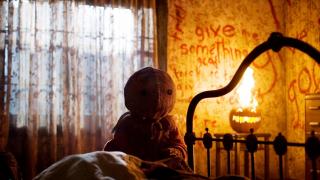 So... I do have to admit that I haven't seen "The Host" yet. The reason I say that is because here's the first still from the sequel. Does the creature in the first film look that terrible? Please inform.

Excited for Mike Dougherty's "Trick 'R Treat" this Halloween? Now you can enter a fan-art contest being sponsored by Warner Bro's for the release. Check it out!

Here's the final one-sheet for "Sorority Row". Not as sexy as the others, but that was a hard track record to live up to.

Ben Ketai has been hired to direct the "30 Days of Night" sequel, subtitled "Dark Days". The film will follow Melissa George's character (recast apparently) as she heads back to Las Angeles and intentionally attracts the local vampire population to get revenge for her husband's death. So, we recast the lead and take the story out of the arctic circle? Count me out.

"Hellified" is a supernatural action movie about a journey to hell, currently in development from Paramount.

Official site launch for "Trick 'R Treat", which finally hits DVD this October. For a great interview with Mike Dougherty on the whole ordeal, be sure to check out the latest issue of Horror Hound Magazine.

Poster and DVD Art for Dave Parker's "The Hills Run Red". The slasher flick is about a group of film fans who are obsessed with finding a print of a long lost stalk & slash, who follow a lead out into the woods and realize that the film... wait for it... never ended! They're now stuck right in the middle of the carnage, as you would expect.

John Landis has sold the remake rights to "An American Werewolf in London" to Dimension Films. Dimension, you may remember, has struggled for over 2 years now to get its "Hellraiser" remake going, with several directors leaving the project due to creative differences. We'll have to wait and see, but that doesn't bode well for this "Werewolf" redo.

Joss Whedon was offered and turned down a chance to work on the "new" "Buffy the Vampire" slayer film which is in development, which is reportedly a remake of the original film. Apparently producers were a little surprised at the level of negative buzz their announcement created amongst Buffy fans (really?), and so they tried to get Whedon in on the action. He wasn't biting, and so presumably they'll be going ahead with development as planned.

"Dead Bones" is a short Horror/Western that you can watch in its entirety at the link. It has gotten good buzz so far, and also stars Ken Foree, who is so fun to watch on screen he actually makes about :30 seconds of the "Halloween" remake watchable. So, your move, partner.

Reason to upgrade to Bluray: All of the special features for Mike Dougherty's "Trick 'R Treat" will only be found on the newfangled medium. Also in today's news, the collection to "Buy Eric a Bluray Player" has officially begun. Line forms to the left.

Via his Myspace, Richard Kelly confirms that there will be a panel for his upcoming film "The Box" at the next Comic-Con. He adds, cryptically, "More news on The Box and Darko projects soon". Darko projects? Is it possible he'll be erasing the horrible taste left in my mouth from "S. Darko"? Stay tuned to find out.