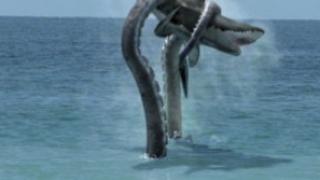 Michael Stephenson, yes the "Troll 2" Michael Stephenson, will be producing and directing a new dark comedy titled "Destroy". The movie focuses on a man obsessed with hunting and destroying vampires even though they don't exist. Which is obviously fiction because vampires do exist and they have babies with normal people, which I think I might how the "Twilight" series ends. So, spoiler alert! Maybe.

A new clip from "Sharktopus" featuring commentary by Roger Corman has been released in honor of the films DVD release. Corman has a cameo as a beach bum who oogles a girl on the beach which is really how we all like our Corman. Either that way or with a side of cole slaw, I like that Corman too.

Mark Pellington, who I would be mocking for his music video directing work if he hadn't also directed "Arlington Road", says that the script for the English remake of "The Orphanage" is actually better than the original. He goes on to say that he's getting a little antsy to get this thing going and wants to close on a leading lady ASAP. Having never seen the original and not knowing much about the remake I'm going to confidently say the girl who played Six on "Blossom" would be perfect.

I can't think of one time Woody Harrelson has been wrong so when he talks about "Zombieland 2" and says he's "not sure it's the right thing to do." I believe him. I would also believe him if he told me that the sky is red and bleach is perfectly fine to drink too though, so maybe I'm not the best judge of people. In any case the future of the film is rocky at best but as of right now is moving forward.

After the success of the ultra-tepid and mega-overrated “Paranormal Activity”, Paramount is hoping that lightning will strike twice by starting Insurge Pictures, an in-house effort that will distribute films budgeted under $100,000. While this sounds awesome at first glance, we all know this'll just become another home for Hollywood vanity project for the likes of Steven Soderburgh and George Clooney to “get back to their roots” by using digital cameras to make scathing indictments of the US military complex starring porn stars and cameos from former teen-stars trying to shed their pretty boy image. On the plus side, you might get to see James Van Der Beek's dong.

Eric Roberts has signed the dotted line to star in the SyFy movie “Sharktopus”. I know that I've been a champion of these movies in the past, but, after the release of “Mega-Shark vs. Giant Octopus”, I find it hard to give a damn anymore. These movies used to be reviled and spit on, which, for me, added to their charm, but, for some reason, with the release of “MS v. GO”, they became a part of the hipster culture and they became “cool” bad movies. “Hey bro, I can't make it to our Brooklyn-based indie art-rock collective band meeting tonight! SyFy has Cyndi Lauper is taking on a Spider-Megalodon!” (And, even more, am I the only one who feels like a total dick actually writing “SyFy”? That channel has gotten so pretentious I'm surprised they haven't done a Phillip K. Dick miniseries yet, with a soundtrack by Joanna Newsom.)

We spoke earlier this week about the return of Vin Diesel to the "Riddick" franchise; plot details are starting to emerge. Expect back to basics with more monsters, which is always fun.

Roger Corman is heading back to the director's chair, teaming with the Syfy Channel for two epic features; "Dinoshark" and "Sharktopus". Sound horrible? Well of course it does! But that is Corman's bread and butter.

Jefferey Dean Morgan continues to grow his genre-cred as he joins Sam Worthington in "The Fields". This time around Morgan will be portraying a detective investigating Gulf area refineries for a murderer. Let's hope he does so as The Comedian.

Hey "Supernatural" fans, your dreams have come true! The CW has officially picked up the show for a sixth season. Maybe I should actually try watching it sometime!