I just waited through a 7 minute advertisement for some video game that gave me seizures to watch the new trailer for "Jurassic Shark". I regret nothing. The movie stars Emanuelle Carriere, who much to my surprise did not get her start in those late night Skinemax movies I watch, and is about a giant prehistoric shark that returns to bring death and destruction to a bunch of girls wearing next to nothing. I know, I'm excited too.

I know what you're thinking, why the hell isn't there a "Poltergeist" remake out there? I know you so well. Well good news kids because Roy Lee, the producer who brought you "The Strangers" and "Quarantine" says a reboot is very much a goal of his and hopes to have it out in the world sometime next year. I'm trying to track down his home address so you can go thank him personally. I'll let you know what I find, there's a lot of Lee's out there.

I refuse to explain to you the plot of "Silent Night Of the Living Dead" but I will tell you that both AJ Bowen and Tom Savini have joined the cast. I know it's tough love but come on, it's a play on the classic zombie flick and a Christmas song. What the hell don't you get? God do I have to wipe your ass too?

I'm not going to lie, I'm pretty excited about "Men In black 3". I don't know what it is but as my age gets up there I'm finding Will Smith more and more enjoyable. I'm just as surprised as you are! Anyway here's a look at the first poster for the film that is scheduled to hit theaters in May of 2012. Have you watched "Wild Wild West" lately? Seriously it's not that bad.

Clive Barker's comic book "Seduth" will be presented in 3D when it's released in October. The story follows "a man driven by his darkest impulses to oblivion and back after being exposed tot he contents of a priceless diamond".

Picture this: A sitcom called "Coffee & Donuts" starring Joe Lynch and Adam Green. Ya, that was the same reaction I had. Apparently it will be based on Green's first short film, and had originally been pitched to UPN a few years ago. Now that the rights have floated back Green's way, he is pitching it as a vehicle for him and Lynch, and studios are showing interest. This may be enough to get me back into watching regular television. Stay tuned!

Sony has picked up the rights to "[REC]2" from the Toronto International Film Festival. Sony was previously responsible for the remake "Quarantine", as well as releasing the original film on DVD.

First TV spot for "Saw VI". So, it's officially that time of year when your non horror-loving friends start saying "they're really making ANOTHER one of these???". 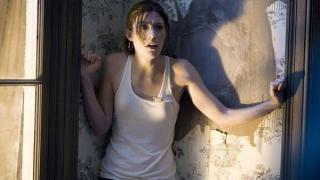 We're back after last week's technical issues and chatting about "Quarantine". Everyone's in good spirits, and we talk about everything from Pumpkin beer to my unhealthy affinity for Jennifer Carpenter.