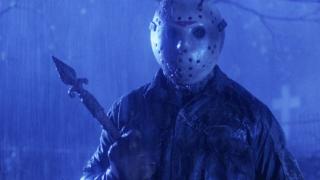 The Lost Kills of Friday the 13th

A new red band trailer for "Hobo with a Shotgun" has hit the nets and it's everything you could want and more. And by more I mean there's a Santa who gets his head shot off. Unless that is something you want, in which case I suggest you seek help immediatly. It's Santa you sicko.

A new trailer for "Insidious" chock full of random quotes from websites I've never heard of has found it's way online and the obvious question is why I haven't been contacted for a quote. I know the movie comes out today but it can't be too late to get in on this. Here goes, "Insidious" is the most frightening movie to ever be invented and will make you soil yourself in the best way possible! I'm a whore.

The MPAA has emerged from their castle high atop the mountain of doom and bestowed a PG-13 rating on the upcoming vampire hunter flick "Priest". I think you can say the F word once with that rating right? Oh man I hope they do it during some awesome fight scene or something. Like Priest kills a bunch of vampires and then looks at the screen and goes "Fuck yeah folks!". So awesome.

Well that's a bummer. David Ellis calling his next project "Untitled Shark Thriller 3D" was apparently all a big joke! The movie will in fact be titled the much more boring "Shark Night 3D". You think I like to be made a fool of, David? It's going to take a lot for me to get over this betrayal.