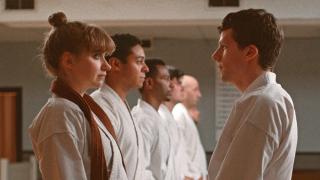 The Art of Self-Defense (Fantasia Festival 2019)

The internet, is there anything it can't do? Why just yesterday some nerd sitting in his parent's basement discovered that Sony registered the domain Insidious2movie.com, leading you to believe "Insidious 2" is very much in the works. This is all very interesting but don't you nerds know there's buckets of pron on the internet? What the hell are you doing checking on horror movie domains?

A new "Twilight Zone" movie has been kicking around for a while now and as the hot balls of Hollywood keep rolling a writer for the script has come into the light. Anthony Peckham, who brought you "Sherlock Holmes" has been picked to write the story for the film which added Matt Reeves as it's director a few weeks back. I have absolutely no idea what I'm talking about anymore.

Jesse Eisenberg, the guy who invented Facebook but not really, is all kinds of pissed at Lionsgate Entertainment for putting his sexy mug all over the promotional items for their flick "Camp Hell", a B-Horror flick that Eisenberg had a small cameo in. So pissed in fact that he's filed a for $3 million lawsuit saying the company is trying to profit from his now super famous name. If he can get $3 million it leads me to believe that I could at least get a couple hundred from that furniture store in Schenectady that used my photo to promote their end tables. I'm on a podcast, bitches!

There's a brand spanking new trailer for "Final Destination 5" out and hey did you know Tony Todd's in this one? So that's something, right? And it's in 3D. Tony Todd in 3D. Man this one is going to be awesome. And I didn't think I'd have anything to say about the new trailer. Thank god and baby Jesus for Tony Todd.

"Jeepers Creepers" mastermind and official NAMBLA member Victor Salva recently let out that if and when "Jeepers Creepers 3" happens it'll be the last installment in the series. Please Victor, say it aint so. He did come out and say that 3D probably wouldn't be an option for the film that's had a script for some time now and just can't seem to get off the ground. Let's keep our fingers crossed that things work out for the convicted sex offender.

If you're holding your breath for a "Zombieland" sequel you better have some pretty hefty lungs my friends. In a recent interview Jesse Eisenberg gave an update on the status of the follow up and it looks like other than some form of a script being worked on not too much else has happened. He does go on to say that all the actors are on board but the longer it takes the less interesting the film will be. Then he kicked a puppy and shot a bald eagle.

And because it's a slow day here's the trailer for a new Cuban zombie flick cleverly titled "Juan of the Dead". As you can expect it's a nod to Simon Pegg and Edgar Wright's "Shaun of the Dead". And by nod I mean there's a cigar smoking mental patient in the corner giving himself whiplash he's nodding so hard. Ay caramba.

"Castlevania: Lords of Shadow" comes out next week and this morning there's a new extended trailer for the video game. Can a trailer be 12 minutes long? I don't know if there's specific rules for this kind of thing but there really should be.

In a new interview over at the MTVs Jesse Eisenberg admitted to being mildly excited about "Zombieland 2". It's a bit early to be poo pooing movies in your career Jesse so smile and do the zombie film or I'll be "mildly excited" to see you hooking down by the train tracks for spare change in five years.

If you're like me and are torn between all the hype around "Martyrs" and your extreme hatred for all languages that aren't English you're in luck. The film's director Pascal Laugier has begun principal photography on "The Tall Man", his English language debut. The film stars Jessica Biel and revolves around a small town were children have gone missing with no explanation.

Break out your black eyeliner kids! HBO and BBC have picked up Trent Reznor's "Year Zero" a post-apocalyptic miniseries that he's been working on since Marlyn Manson was still cool. That's a long time for those of you who don't get my mid-to-late 90's sarcasm.