Juan Carlos Fresnadillo, who directed "28 Weeks Later", arguably the second best of the time later movies, has been confirmed to be directing "The Crow" remake which is full steam ahead after delays out the ying yang. I played football in High School and for one game this kid painted his face like "The Crow" because he thought it would be frightening to the opposing team. Holy crap we harassed that kid to the point of tears. Good story huh? "The Crow"!

Holy mother of god the remake goodness just keeps flowing. Here it is folks, the first stills from the "Fright Night" retelling for your peepers and man are they.... there. I mean look at Evil Ed! He looks so... not evil, I'm sorry I can't do this today. Let's move on.

Javier Bardem, who is my all time favorite air gun murderer, is close to signing on to play Roland Deschain in the "Dark Tower" series that will be spread over three films and a TV series. I never read the books, should we be upset or really excited about this?

I only know Madeline Zima as the girl who likes to punch guys in the face while she makes the nasty on "Californication" but apparently she's done some other things. Things meaning she's signed up for the new people trapped in a bunker thriller "Storage". I've got high hopes for this one people, mostly because it seems like Madeline has no problem getting nude, so I assume this movie is going to be great.

Your latest "Fright Night" remake news, straight from McLovin's mouth. It will be rated R. Man, that was exciting, wasn't it?

Wes Craven seems to have been attending the Rob Zombie school of marketing your movie in the 21st century. Or at least I assume so, based on the flood of BTS video and pictures hitting the internet since the film started shooting... YESTERDAY. I don't think I can handle this every day leading up to the projected 2011 release date.

Tilda Swinton cast as the infamous Elizabeth Bathory in "The Blood Countess. 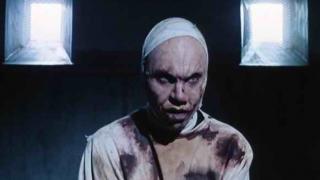