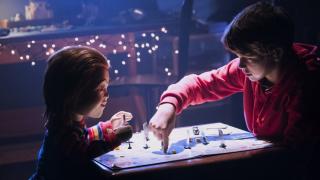 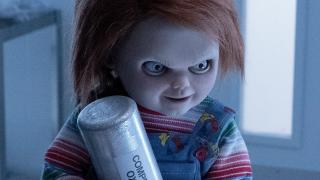 A new poster for John Carpenter's new flick "The Ward" has come out and don't even bother clicking the link because I'm going to explain it so well you won't even need to see it. Remember that scene in "Labyrinth" Jennifer Connelly falls down the hole and all the hands hold her up? Well it's just like that but with Amber Heard in a short skirt. See! No need to look at it now.

You know what "The Ring" was missing? An all female Japanese pop group! I know it's so obvious now that I've said it. Luckily the movie "White" is here to fix that with a gaggle of new photos and a full out trailer. The movie revolves around the pop group Pink Dolls (I think that's a pun) and the strange events that happen to them after they discover a mysterious video. Sounds super spooky and as a bonus, dance numbers!

Confused as to why there's a "Carrie" remake in the works? Well so is Stephen King. In a recent interview with Entertainment Weekly he asked the bold question "why, when the original was so good?". The remake is set to stay truer to King's original book but by his own admission the movie version was actually scarier. He then went on to ask "what's the deal with airplane food?" but by then I assume the interviewer had walked out.

While we all wait for a new "Child's Play" movie to happen the good people at TikGames have decided to bring Chucky to your console in the form of a new video game they hope to have out this fall. The game will apparently be the original story and allow players to control the little killer himself. Will it be awful? Probably. Will I pay money for it? You bet your sweet ass I will.

With "Hot Tub Time Machine" being a moderate success, director Steve Pink is taking aim at a horror comedy for his next project. "The Werewolves of Reseda" will chronicle the suburban lives of werewolves and how it makes their lives better.

With today's rough economy, even our favorite screen stars are feeling the pinch. That's why you can now find Jason, Freddy and Chucky in recent Burger King ads.

According to Production Weekly, "Wanted" director Timur Bekmambetov will be tackling a classic as he has signed on to direct "The Casebook of Victor Frankenstein". A recent novel by Peter Ackroyd, the story tells of the days when Victor Frankenstein meets the lovely poet Percy Bysshe Shelley.

Frank Darabont must be doing something right as AMC has ordered up six episodes of "The Walking Dead", which has yet to begin filming or even cast its main star.