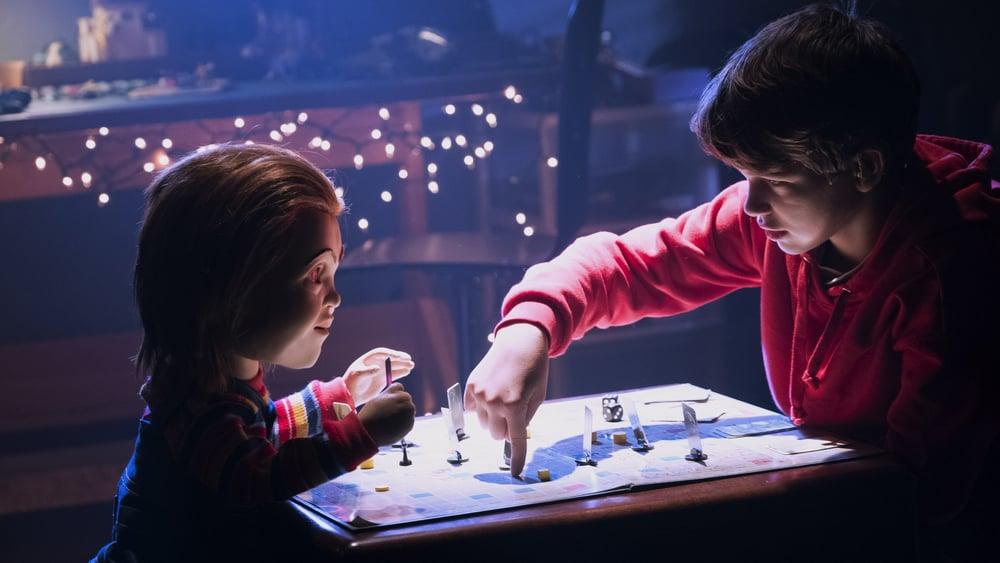 Chucky in 1988’s Child’s Play: a Good Guy doll inhabited by the soul of a serial killer who performed a voodoo ritual on the toy, who then becomes singularly focused on transferring his soul into a human boy; Andy, the boy who unfortunately came into possession of Chucky. Chucky in 2019’s Child’s Play: a Buddi doll equipped with artificial intelligence designed to control corporate household devices while also being a child’s companion that just so happens to have had all its safety protocols disabled by a disgruntled employee and develops a desire for violence through a “need” to protect his best friend, Andy (or the pre-teen who Chucky "imprinted" on...eeew) while watching TCM 2.

The number one question we ask ourselves with any remake or reboot when released is, “Was this necessary?” There was absolutely no need for a Child's Play remake/reboot. Full stop. Regardless of your stance on the original and it's subsequent sequels, which have evolved over time and of which one was released in the last year, it more or less still holds up as the jumping off point for a slasher cultural icon. Above all else, it cemented the voice of Brad Douriff in genre fans’ hearts for all eternity.

In 2019, yes, the premise is vastly different and takes a much a new approach to Chucky, but the circumstances that kick the movie into gear and propel us to the end are wholly uninteresting outside of a few gnarly kills. Indeed, the film is not at all concerned with following through with its own rules during the finale, which as it turns out also invites for a genuinely creepy idea. But as it stands, the stage this new Chucky rests on is shaky at best. By simply having a disgruntled employee turn off the doll's "Bad Language" filter, it's violent tendencies (yes, that's an option available on this mass produced toy) and various other ridiculously programmed safety protocols, the film invites a sense of incredulity it doesn’t earn. Had Tyler Smith's script truly embraced the technology gone bad and explored the risks of cybersecurity, the potential of the premise could have been endless and eliminated lingering issues with the film's internal logic. Lars Klevberg doesn't seem to care enough to take advantage of his jailbroken antagonist.

Plus, the design of the Buddi doll is comically, if not purposefully bad. It's hard to imagine anyone willingly allowing the monstrosity in their home to control their devices, or for that matter, be alone with their children. These all serve as lingering problems even with some of the fun that's being had at the expense of the doll's appearance and some of the clever utilization of Chucky's skills.

The best parts of the new Child's Play serve only to highlight the underlying problem; this didn't NEED to be a Child's Play movie. We will of course never know if boasting a different name would have helped or hurt the property, but simply by adopting the franchise's namesake, design aspects of Chucky, Character names, and a few poorly mimicked lines it only reminds us that there's a much beloved (obviously not by everyone) version out there that is still having new movies produced. Would we be criticizing an original concept that evoked the Child's Play motifs as an off-brand knock off trying to capitalize on another brand's success? Or is it accurate to volley those criticisms at this film?

On some level, the excitement of seeing any version of Chucky on the big screen again (the most recent sequels being DTV) is all too tempting to root for. The addition of Mark Hamill into the Chucky-verse is charming and inspired, though his approach feels a bit too goofy to ever feel menacing. The more edgy bits feel like that time you made your Speak and Spell recite profanities rather than a malicious AI trying to unnerve and intimidate. Additionally, it's hard to undermine the good work being put in here by Aubrey Plaza, Brian Tyree Henry, and Gabriel Bateman (who is hearing-impaired in this presumably only so a kid can make a "are you deaf" joke). Once the finale kicks into high gear, however, everyone takes a backseat to the plastic/rubber apocalypse Klevberg suddenly upshifts into.

A double edged sword of damned-if-you-do, damned-if-you-don't, the new Child's Play should have left well enough alone and opted for “don't.” Unfortunately, the highs do not outweigh the lows for Klevberg's Child's Play, but he does earn a bonus point or two for reintroducing some form of Chucky to a new generation, which, if the gods are just, will compel a slew of new fans to seek out and appreciate the OG Chucky in all his vulgar and psychopathic glory.

Halloween 4: The Return of Michael Meyers

The Bird with the Crystal Plumage