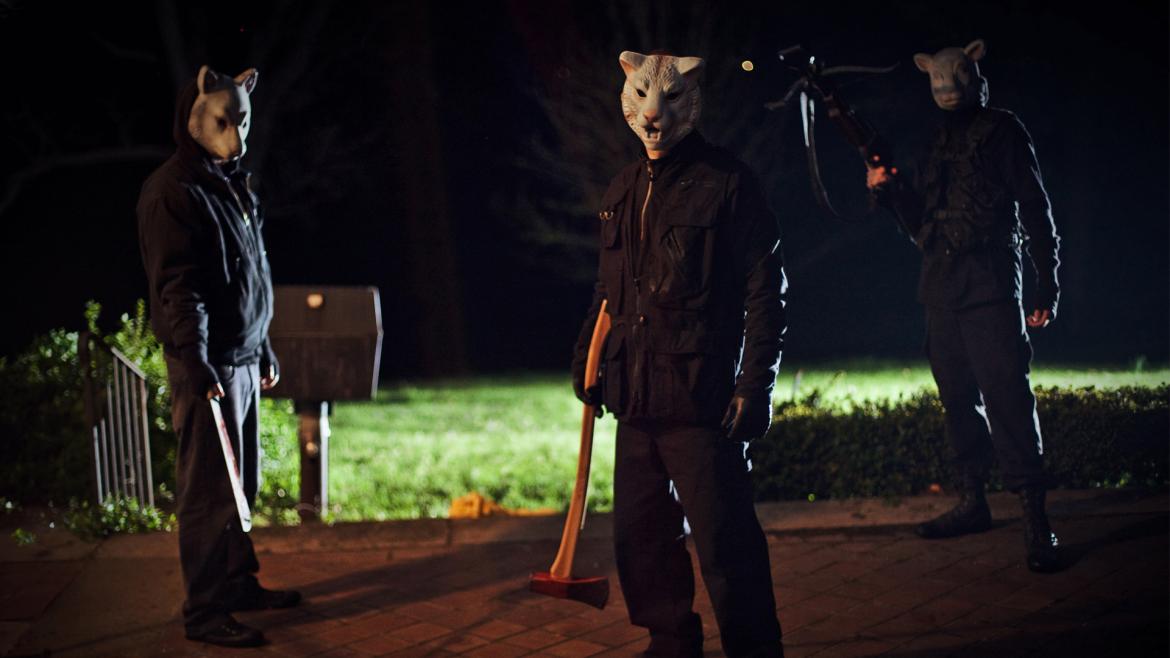 You're Next (Movie Review)

The long gestating festival gem "You're Next" has finally been released to the general public. Originally produced in 2011, it fell a similar fate to last year's "Cabin in the Woods"; being a very well received critical darling but getting put on the back burner for other studio material. Featuring a score of Indie horror icons (Joe Swanberg, Ti West, and writer/actor Simon Barrett), "You're Next" is a prime example of the next generation in horror beginning to surface for prime time exposure.

The Davison family is having a get together for parents Paul (Rob Moran) and Aubrey's (Barbara Crampton) 35th wedding anniversary. Their 4 children have assembled at their vacation mansion with their respective spouses to celebrate the occasion; though familial tensions run deep and old grievances surface shortly after the weekend's inaugural dinner. The uncomfortable tension is quickly cut but an onslaught of arrows and violence as animal masked murderers descend upon the home without unknown motives and without conscience. The tables are turned when it comes to light that Erin (Sharni Vinson), girlfriend of brother Crispian (AJ Bowen), was trained by her father for 15 years as a survivalist expert and has much in store for those involved with the murders.

The premise of "You're Next" is that of a simple, and overdone, home invasion style thriller. But where the majority of movies in this scenario seem repetitive, "You're Next" is able to succeed with little tweaks to the formula. An introductory sequence sets up our killers as talented, gruesome, but not without flair. Scrawling the titular phrase "You're Next" upon the walls becomes part of the troops' calling card. After the initial "Scream" like rush of adrenaline though, we're given ample amount of time to bond with the Davison family. We're able to see their inner struggles: mother is anxious and medicated, oldest brother Drake (Joe Swanberg) is a pompous instigator who feeds off conflict and pops Vicodin to alleviate sexual frustration within his marriage, Crispian has fallen for a student of his and deals with criticism of this and his weight. There are many more attributes each character features and we're treated to all of their differences and unique personality traits before the carnage comes. This allows us to bond more fluidly with the family, and truly feel the weight of each death as the come throughout the film.

When the deaths do come, they come fast and fierce. Each member is of the family is eliminated to differing degrees of horror. Whether that be piano wire, crossbow, sledgehammer, or axe; all the deaths carry emotional weight as you feel each character's struggle to escape this awful situation. Director Wingard does a particularly wonderful job here as well using the geography of the area which was set up throughout the preamble of the attack. By knowing where we are in relation to the house, dining room, neighbor's house, etc. the tension is amped up to alarming degrees because of how close we know each character is in proximity to another.

Once the character's begin to go, it's clear and obvious who the standout will be not only by the character's actions but buy the performance within. Sharni Vinson gives a potentially iconic turn as survival expert Erin. Becoming the perfect example of someone that knows 'what you should do in a horror scenario', Vinson not only efficiently takes care of business and utilizes all her resources to the fullest extent. She is able to extend a great amount of pathos through realizations about characters' loss and motivations as the movie evolves. Much like the new iteration of Lara Croft in 2013's "Tomb Raider" game (which by the way, Vinson should be in the catbird seat were the to go that route for a movie now) her demeanor, physical appearance, and relentlessness collect into a delightful show as she wreaks havoc upon her attackers during the second half of the film. The razor sharp tension and sense of dread as a family is literally torn apart morphs into a realistic revenge scenario as we're treated to Erin's "Home Alone" traps and stab happy nature.

"You're Next" arguably has come along at the wrong moment in the horror genre. It didn't perform very well at the box office opening weekend, has had to languish in the shadow of a worse film with a similar tone in "The Purge", and also came after a horror smash hit with "The Conjuring" grossing over $120 million stateside this summer. Regardless of it's place within the culture, this is a great horror movie that should be scene by horror fans all over and on the big screen if possible. It features people you're going to learn to love over the next few years, tells a tight and relatable narrative, and offers up some fantastically terrifying kills and gore sequences. "You're Next" should survive to become a touchstone of this type of horror over the years and triumph in the stead of weaker films that feature its familiar tropes.