Benni Diez sounds like some sort of weird Juggalo name but it's not. It's a guy who directs films and he's just been hired to direct "Stung", a new flick about giant wasps that will straight up murder your ass. Filming is scheduled to begin this spring, which I assume will give the filmmakers enough time to grow giant wasps. Woot woot.

Good news! The sequel nobody wanted has gotten a title and plot synopsis. I'm speaking of course about "I Spit On Your Grave Too". See what they did there? This time around we follow a young model trying to make it in the Big Apple who finds herself kidnapped, tortured and shipped off to another country where she's left for dead. Am I the only one who thinks the third one should be Oprah themed? I spit On your gave! And I spit on your grave! And your gave and your grave and your gave!

How the hell is it that Japan has had a longer version of Troma's classic flick "The Toxic Avenger" for this long? I didn't bust my ass in WWII for that kind of crap to be happening. Well good news freedom fighters, the much desired Japanese version of the flick is coming to the US on December 11th in DVD form. Not Blu-Ray, because Johnie Freedom don't need no Blu-Ray.

Fun fact. This past September the BGH crew was in an elevator and we were 99% sure we made "A Nightmare On Elm Street" it girl Heather Langenkamp big time uncomfortable. Turns out it was actually the step mother from "Terminator 2". Funny story huh? Anyway Heather Langenkamp has landed a small part in "Star Trek Into Darkness", the J.J. Abrams sequel to 2009's "Star Trek" reboot. See how that whole thing tied in?

These new production stills from "A Nightmare on Elm Street" would lead us to believe that the movie could be good and gory. We'll have to wait until April 30th to see if this promise rings true.

In a recent interview, Lloyd Kaufman lets slip that there are a number of Troma movies in talks for possible remakes including "Poultrygeist" and "Class of Nuke 'Em High". One would normally take news like this from Lloyd with a grain of salt, but the "Mother's Day" remake has already wrapped and "The Toxic Avenger" is in talks, so stranger things have happened!

Not to let Sam Worthington steal all the godly thunder, Stephen Dorff has signed on to "War of the Gods", another Greek monster fighting montage.

Though we have yet to lay eyes on any of her genre rolls yet, young actress Chloe Moretz has signed on for the serial killer opus "The Fields". With her upcoming turns as our fanged lead in the upcoming remake "Let Me In" and her ass kicking antics in "Kick-Ass", she sure seems to enjoy the genre work. 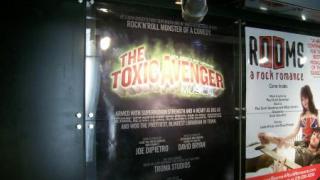 Review of Toxic Avenger: The Musical