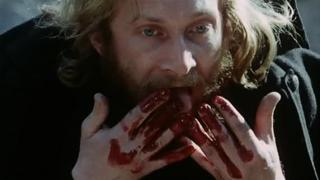 I get my young starlets mixed up a lot but I'm fairly sure Ashley Tisdale has either made a porn, had nude phone pics of her leaked, or bedded one of the Kardashian sisters. Whatever it was we can all discuss it in length on a soon to be recorded podcast because the former Disney gal has been added to the cast of "Left Behind". The film focuses on a group of people who are left on earth after big JC takes all his followers up with him to heaven. A-Dale (I just made that up) will play Nic Cage's daughter in the film. I assume Cage ends up being Jesus. It would just be silly if something else happened.

Despite my hatred of all things not-English I actually liked Spanish filmmaker Alex De La Iglesia's 2010 weird ass flick "The Last Circus". So I am kind of excited to learn about his next project titled "Witching and Bitching" which follows a group of robbers being hunted down by a group of witches. I'll be honest I was sold on title alone. I just pray this one has a lot less chubby-man ass in it.

I had no idea that "Mimesis: Night of the Living Dead" was a thing but apparently it's going to hit DVD and Blu-Ray on February 12th. For the rest of you who had no idea about the film either, it follows a group of strangers who are brought to a house for what they think is a big horror fan event and find themselves trapped in a real life recreation of the classic 1968 Romero classic. The important thing here is that I now know what "mimesis" means.

I can't imagine anyone is looking forward to the new Halle Berry flick "The Hive," but if you are you should know that the title has changed to "The Call" and will see the light of day on March 25th. The bright spot here is that the film is being directed by "Session 9" main man Brad Anderson. The dark spot is that it's being put out by WWE films so there will most likely be a Stone Cold cameo. Alright fine, I'll admit it, that's a bright spot also. 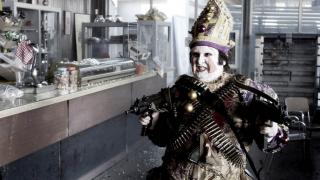 If you're looking for something to give you nightmares tonight then you're in luck because there's a new trailer for Alex de la Iglesia's "The Last Circus". It's chock full of sad clowns, clowns in the mood and of course clowns that will beat the living hell out of you for looking at them the wrong way. Clowns don't play son.

Tickle me excited folks because "Return of the Living Dead" is getting its own documentary. Beverly Randolph, who plays Tina aka not the one who stripped in the graveyard in the original film is an executive producer on the project that's currently gearing up for production. The doc will focus on the first 3 films in the series and will sadly ignore "Rave to the Grave", which just missed cashing in on the techno fad by a short 10 years.

A brand spanking new post for the upcoming Troma film "Father's Day" has hit the net and after seeing it and reading the description I'm a little disturbed. Apparently the movie focuses on a mad man who stalks a town by raping and murdering all the local fathers. Does this happen a lot? I think I need to reconsider this whole parenting thing.

For those of you out there sitting and waiting for the release of Josh Schwartz's "Fun Size" then get excited because the Halloween comedy will hit theaters on October 12th 2012. Then get depressed because you're sitting around waiting for a movie that's being directed by a guy who produces "Gossip Girl" and features Chelsea Handler. You feel stupid now don't you? Good.

There's nothing more fun than nutso clowns battling each other to the death is there? Well "The Last Circus" is here to make all your wildest dreams come true and today there's a red band trailer for the big top blood bath. The film revolves around a love triangle between a sad clown, a trapeze artist and her abusive happy clown husband. Sounds like what Cirque du Soleil would be if it was tolerable.

Get in line now kids because on October 26, 2012 "Halloween 3" will hit the theaters! No director has been picked for the third installment of the much debated Rob Zombie reboot but there's little to no chance Robbie will have anything to do with it. Which is good for haters of the first two but really bad for lovers of slow motion pan shots set to crappy 70's cover songs. Correction: Patrick Lussier will direct "Halloween 3D". You can go back to planning your next D&D gathering in your mom's basement now.

I was pretty down on the "Conan the Barbarian" remake for a long time but since watching Jason Momoa, who will play Conan, on "Game of Thrones" I've become more and more fired up. Now there's a new red band trailer and TV spot for the remake and I think I'm going to run out and get myself a loin cloth and sword. Once I get those I can really focus on getting washboard abs and being cast in the sequel.

"The House at the End of the Street" has been kicking around for a while now and as of today it looks like the film will finally see the light of day on April 20th of next year, yes that's 4/20 you filthy hippies. The movie stars Jennifer Lawrence and Elizabeth Shue as a mother daughter combo (try to guess which is which) that move into a house where a family was mysteriously murdered and begin to uncover the community's spooky secrets. It's Shue who plays the mother, that Lawrence girl is like 20, people. I wish you'd think before you answer sometimes.