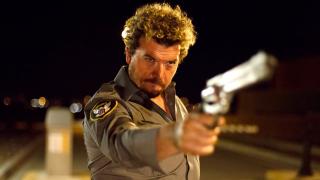 Wait did I know there was a "Poltergeist" remake in the works? I feel like I might have known that. I feel like I might have started a post with this same stupid joke before too. Rosemary Dewitt has been cast in the lead role of the 'hey you built your house on top of an indian burial ground' film so I'm assuming they're doing a remake. What a terrible joke this is to play on here if there really isn't one in the works.

I am a big ol fan of George A. Romero's "Dawn Of the Dead". A super big fan even. But at no point did I ever say, "Hey this needs to be shown in 3D". Despite that thought a 3D conversion is in the works and it look like there might be plans to put the film out in theaters again. No release date has been dropped but apparently the conversion is about a third of the way done so we will see how this all goes. I mean I thought "Nightbreed" only needed to be an hour and 15 minutes so maybe I'm all wrong about this conversion. I'm just a big dumb penis after all.

"Hustle & Flow" is one of the greatest movies ever made and Terrence Howard is one of the greatest actors or all time. There's no arguing that. Any jackass who knows his ass from his hand can figure this out. So now that he's been cast in M. Night Shyamalan new Fox series "Wayward Pines" I have fairly high hopes. The show will focus on a secret service agent who comes to a small town looking to find to missing agents. Stuff happens I guess, but nowhere do I read a description of a rapping pimp that he encounters so maybe my hopes aren't as high as I thought they were.

Never let it be said that I don't love an extended version of a film. Never! In fact I am rather smitten with the news that to celebrate the film's 40th anniversary the folks at StudioCanal will release "The Wicker Man: The Final Cut". To be released in the UK on DVD this coming October, and hopefully in the US shortly after, the classic film tells the story of a police officer sent to a remote island to investigate the disappearance of a young girl. Seriously, If there's one thing I say about movies it's "Hey could you tack on another 45 minutes to that gosh darn thing already? I'm trying to watch a movie here!".