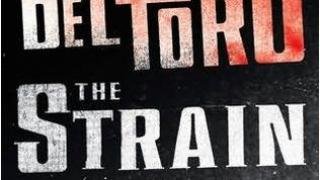 "The Strain" Gets Two Trailers

The official website for the Del Toro-Produced "The Strain", some type of vague vampire film that we don't have a lot of details on yet. Someone let me know at what point we get annoyed that he's got 20 projects going right now but he's not currently directing anything. I always jump the gun on these things.

The teaser poster for "Sorority Row", the remake of the early 80's film "House on Sorority Row". Check it at the link.

Warner Bro's snags a movie deal for the SyFy show "Primeval", which is about "ferocious prehistoric and futuristic creatures that appear through wormhole time portals, and a covert team headed by an evolutionary scientist tries to close the doors and quietly thwart the creatures". I haven't seen this show yet, but it sounds like they just mashed up every SyFy feature film ever into a TV show. Anyone a fan?

Were you eagerly awaiting a sequel to Tobe Hooper's "Toolbox Murders" remake? Me neither, but they're trying to placate me by throwing Jeffrey Combs, Tony Todd and Lance Henriksen into the mix. Did it work? You can check out the teaser trailer at the site and tell me.

Jaume Balaguero to direct "Flatmate". Balaguero is one half of the duo behind the original Spanish film "[REC]", but little else is known about the project at this time.

Sweet Jesus, a sequel to "The Messengers"? ME NO WANT. If you want, there's a trailer at the link.

Simon Baker to star in "The Killer Inside Me, as a really handsome murderer who kills other handsome people, like Casey Affleck, Jessica Alba, and Kate Hudson. It's just so realistic!

Christopher Lloyd has joined the cast of "Piranha 3D". I'm officially going to start having wet dreams about this movie. Stay tuned for details.

The adaptation of Steve Niles "Wake the Dead" is delayed because the WETA workshop has to work on "The Hobbit" for Guillermo Del Toro. Jesus, the guy's so freaking busy that now he's delaying other people's projects? Will his reign of pudgy Mexican tyranny ever end? (I kid, I kid)

Guillermo Del Toro discusses his inspiration for his "Strain" trilogy of vampire novels, the first of which is due to hit bookshelves on Junes 2nd.

Robert Downey JR wants to play Edgar Allen Poe in a script written by Sylvester Stallone. I know, I thought he was off drugs too, this is so sad. (JOKE, people)

So, we decided the other day that this new Filmax flick "Paintball" has a cool trailer, but was really playing the paintball schtick up way too much for me to take it seriously. As you can see though, they've really kept it classy with the poster. UGH.

Adam Green is hoping he'll get to shoot "Hatchet 2" next winter. Nothing is set in stone yet, but the idea and the interest is there, now it's just all about the pieces coming together. I for one would definitely watch if Green were to turn out another hilarious slasher in this series.

Speaking of interesting, if not totally amazing slasher films, it turns out that there's a Tobe Hooper-less sequel to his "Toolbox Murders" remake currently in the works. This one promises to "rise far above the last Toolbox". Guess we'll see.

Joe Dante won't ever write or direct a "Gremlins 3", although he does see it happening at some point in the future (just without him, apparently). He also says he thinks the guys who made that infamous "fan film" should be responsible for another sequel, and that he's currently working on two spectacular Blurays of the original films.