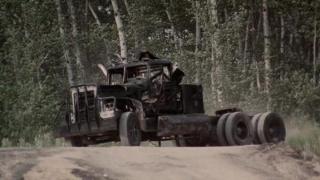 Good news for those of you who hate your childhood memories! There's a remake of both "Firestarter" and "Maximum Overdrive" in the works. The later I am a bit worried about because I heart it so, the first one though I can't wait to see that song by The Prodigy become popular again. No one else remembers it? Get off my lawn!

Who's excited for "Death Race 2"?! What, only Jon and I? You all disappoint me. Anyway here's some new clips and what the kids call a featurette from the hot new flick that surprisingly will not see a theater release.

Shooting for the upcoming space horror flick "Apollo 18" is currently set to begin on December 20th. Which is interesting seeing how the film has a confirmed release date of March 4th. Now I'm not a mathologist but that sounds like a really short time to make a big time movie that's going to be in theaters. I look forward to the DVD release on April 13th though.

Ron Howard checked in with an update on his big and little screen adaptation of Stephen King's "The Dark Tower" series. Apparently he's both excited and violently ill about the opportunity to turn Mr. King's life work into walking pictures. Alright maybe he didn't say violently ill but I can read between the lines.

Danny Trejo and Erin Cummings are rumored to star in the biker gang revenge flick "Tarantula". Is it weird that I have a man crush on a 60+ year old ex-con? Yeah I thought so. Oh and don't think I didn't notice the last name Cummings.

There's a new clip out there for the upcoming "I Spit on Your Grave" remake and it's a real hoot. I've yet to figure out why this remake needed to happen but I have to say the cast really got the whole creepy white trash thing down. That's a plus, right? Right?

For the kids in the Los Angeles area you've got a chance to see the Stephen King classic "Maximum Overdrive" on the big screen. This film's got killer trucks, Lisa Simpson and a soda machine that hates guys balls so there's really no reason not to love it.

A new clip from "Dexter" Season 5 has found it's way online and I couldn't be more giddy about it. The news season premiers on September 26th and I've already got my special order of 50 wings in for that night. That really has nothing to do with the show I just really like wings... a lot.