Get excited folks because there's a now video online with some hot behind the scenes action from the upcoming "Alien" prequel "Prometheus". Now get depressed because there's not one freakin alien to be seen in the clip. There is a lot of Ridley Scott though. So if you're into old guys this video will really do it for you. You should also check out "Cocoon". Tons of old guys in their bathing suits. I won't judge.

"Paranormal Activity 3" is headed to DVD on January 24th and today we've got a stockpile of features that are going to be included. I realize stockpile is not the right word but it sounds really cool so lets just go with it. Both the DVD and Blu-Ray will feature the theatrical and unrated versions of the film and the later will also give a gaggle of additional clips that didn't make it into the film. Alright that's not really much at all is it. This would be the worst stockpile ever imagined if it really was one.

I like Dennis Quaid but I have a tendency to mistake him for Jeff Bridges who I really like, mostly because he was in "The Big Lebowski" and that movie was awesome and I love it. I know I know I'm a hipster prick who references The Dude at least once a day. Well 'Eff you buddy I saw it in the theaters opening weekend so get off my back. Man you're such a jerk sometimes. Here's the trailer for "Beneath The Darkness", which stars Quaid as a local funeral home director with a dark secret. Wow it took us a while to get here didn't it?

And if you're into Jessica Biel, which I'm assuming everyone who isn't into old guys is, here's some new shots from her upcoming flick "The Tall Man". The film is about a small town haunted by the urban legend of a "Tall Man" who kidnaps children. So today we've had old guys, tall men and Jessica Biel. If my news didn't get you all hot and bothered there's a good chance you're already dead.

Hey do you like sexy ladies doing sexy dances? Sure, we all do! Well here's a new clip from "Mother's Day" which not only has that but also some creepy looking guys enjoying the show said sexy girl played by Briana Evigan is putting on. "Mother's Day" has no specific release date but should see the light of day sometime before the end of the summer. You should have read this entire post in the voice of Sally Struthers.

If there's one thing that "Repo! The Genetic Opera" taught us it's that not even Bill Moseley can save a crappy movie. But none the less he's been cast in the upcoming film "Leatherface 3D" in the role of Drayton, a nod to the role Jim Siedow played in the first two Texas Chainsaw films. So maybe old Billy boy can make this one magical. Maybe the next "2001 Maniacs" will win an Oscar, too.

I've never hid the fact that I believe Dennis Quaid is a cold blooded killer in real life. So I like to think the new movie "Beneath the Darkness" is something of a cry for help from the people in Hollywood who know the truth. In the movie Quaid plays a local hero who is actually turns out to be a psychopathic killer. This might be a documentary.

And lastly here's a new trailer for "Cowboys & Aliens" which hits theaters on July 29th. The trailer is chock full of, you guessed it, aliens and cowboys. Not necessarily in that order. But there's also about a half second shot of what looks to be a nude Olivia Wilde. Or it might of been Giada De Laurentiis from The Food Network. I always get those two mixed up. 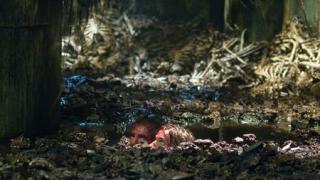 For the first time in a while we're all back in action and talking about a new release, the scifi film "Pandorum". 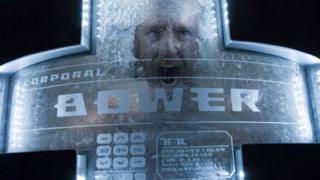