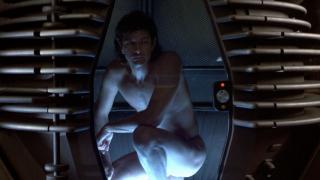 I love me some "Robocop" remake updates. You know this about me. I've said it countless times. Need proof? Gaze upon my rock hard nipples while I tell you that Jennifer Ehle, who was in "Contagion", has signed on to join the cast. She'll play someone named 'Liz Kline'. I don't remember who that is from the original. But you're not thinking about that anyway are you. You're thinking you want to see me cut glass with these puppies. Well keep waiting.

Oh how the mighty have fallen. 13 years ago M. Night Shyamalan was our love child and today we get news that he's working with Syfy on a new pilot titled "Proof". "Proof" will focus on a young man who offers money to anyone who can prove there's life after death when his parents die tragically. I can only hope Tiffany will pop up in the cast somewhere.

Little known fact, I am not the German kid in that popular internet video where the kid freaks the F out while playing "World of Warcraft". I know it's an honest mistake, I get it all the time. I've never actually played the game but apparently people go nuts for it but the obvious big screen version has been riddled with problems. Well today's there's some good news for the project in the form of Charles Leavitt being tapped to write the script. I think that's good news. I mean he wrote "Blood Diamond". You basement dwelling virgins should be pumped he'd touch your silly game.

At this point I'm at a loss as to who looks at Brendan Fraser and says "Yeah, get that guy in my movie" but yet again he's been cast. This time in "Split Decision", a new film about two children being hunted by a couple murderers after they accidentally witness the killing. Fraser will play the father who tries to save them. Alright I can't even lie, I find the guy charming as crap. Did you see "Looney Tunes: Back in Action"? I can't not watch that whenever it's on TV.

Director Stephen Soderberg has fast tracked his next project, the outbreak action-thriller "Contagion". Joining him will be Matt Damon, Jude Law, Kate Winslet and Marion Cotillard. So far, the origin of the outbreak is unknown but investigation shows it is narrowed down to either a viral situation or runaway actor egos.

Normally I don't like to fuel crazy rumors, but this one is too good to pass up. The story that Universal is a planning a possible "Jaws" remake has been around for awhile. Think a reboot is bad enough? How about a reboot starring Tracy Morgan in the place of Matt Hooper?

In other star packed ego news, Rachel Weisz will star along side Daniel Craig and Naomi Watts in the haunted house thriller "Dream House". Reportedly, Weisz will be filling the lead role originally given to Watts.

"Paranormal Activity" continues to make waves as it scares the vino out of Italy. The country's emergency response service has been flooded with calls from teenagers and youth suffering from panic attacks after viewing the commercials. So far, the government has yet to ban the film.

Draco Malfoy has joined the cast of "The Apparition", a story about a couple haunted after a college experiment. So far, it would appear that Tom Feldon is going to be cast as the film's 'star power'.