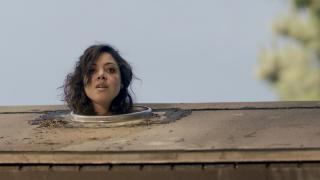 Joe's going to hate this.

Three new characters have been confirmed for the second season of A&E's "Bates Motel". It looks like Norma is going to get a new boyfriend, a new friend in town and a brother who shows up in town. Chances are they'll all be dead before the end of the season but for now let's just sit back and drink in all the love I feel flowing in this post. God that feels good inside you doesn't it?

Damian Shannon and Mark Swift, the guys who wrote the "Friday the 13th" remake have apparently gotten in bed with the folks at New Line for a new horror flick that they are apparently calling a "potential franchise starter". No other details are available but they've also said the film won't be found footage and won't be micro-budget. They didn't say it won't be awful though. So ya know, that's still on the table.

Elijah Wood is producing a horror-comedy film called "Cooties". Rainn Wilson, Alison Pill, Jack MacBrayer, Jorge Garcia and Nasim Pedrad have all been added to the movie about a group of rabid kids who terrorize their teachers. I assume all of these people will be teachers, or this will be the worst "teen" casting since "Scream 4".

"This script is terrible and only the guy who co-wrote 'Predators' can fix it". Something I never thought would be said but apparently someone at Paramount uttered those fateful words because Michael Finch has been picked up to re-write the script for "Hellified", a new film about a group of criminals sent to Hell to stop the end of the world. He's kind of like a superman for movie scripts you aren't going to like.

John C. Reilly can do no wrong in my eyes. Alright I'll admit I never saw that movie where he plays a vampire who runs a carnival, or something like that, but everything I've seen him in has been pure gold. So I'm excited for "Life After Beth", a new zombie comedy flick he's going to star in along with Aubrey Plaza, the depressing girl from "Parks and Recreation". The film is based off of a UK short and will be 100 times better because Reilly is American and we don't drink tea.

According to James Franco himself he probably won't have a role in "Dawn of the Planet of the Apes" after some shifts at Fox's big boy table. Nothings confirmed but Franco had apparently had a small role in the sequel but is now fairly sure the part has been cut. He then went on to say nobody calls him anymore and he's so lonely. He then sobbed uncontrollably for 45 minutes.

I don't know where the hell this came from but "The American Scream" is now available on DVD and it sounds pretty awesome. The documentary follows 3 different families as they transform their homes into spooky time attractions for the Halloween season. Sounds like a dandy Christmas gift for that special someone on your list. Wait, next week is Christmas? Where the hell have I been!?