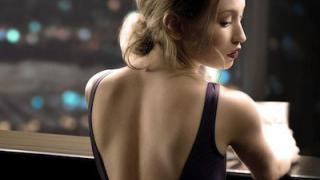 This ain't your grandma's "Sleeping Beauty."

Jason Momoa has been signed to star in Marcus Nispel's upcoming reimagining of “Conan The Barbarian”.While I am excited that a new Conan flick is on the horizon, don't you think he should look more like a Boris Vallejo painting and less like a dreadlocked hippie douchebag playing guitar while selling vegan burritos outside a Widespread Panic concert?

It looks like “Ghostbusters 3” is going to be in 3-D. Well, that's disheartening! Is sad to think that a movie of this legendary comedic pedigree, in order to sell it to idiotic audiences in this day and age, needs to resort to this irritatingly faddy 3-D upsurge. What's next? Justin Beiber as the newest recruit? A ghost who Tweets? Slimer relaxing with a Kindle??

Sam Jackson and Josh Duhamel are supposed to star in the next big angels vs. demons horror-thriller “Sympathy for the Devil”. In other news, Asylum has started rolling on the similarly-themed “(I Can't Get No) Satisfaction” starring Mario Van Peebles and Chad Lowe.

The big news today? That the much jizzed-on “Paranormal Activity” goes wide, and all thanks to the 1,000,000 of you that took the time to vote online! Sure, we're in the middle of two wars, the dollar is becoming useless and we are on the verge of eating our pets, but, hey, entertainment reigns supreme! The best thing about this massive hype? I can't wait for the sure-to-come backlash now that everyone can see the movie without having to resort to midnight movie theatrics. For more info, click here. To join the Army, click here.

What's the other big news on every single Goddamned horror movie site? In a just posted Twitter, Wes Craven thinks that Kevin Williamson's “Scream 4” script “sounds fantastic”. In other Craven/Twitter news that hasn't made it to the news sites yet, today he's eating “tomato soup for lunch...again”, “hates traffic on the 405” and wants to know if you've heard about “that krazy balloon boy in Colorado”.

According to Variety, “Universal Pictures has set Chris Messina to star in "Devil," a horror-thriller based on an M. Night Shyamalan story that will be directed by John Erick Dowdle and Drew Dowdle.” I have no idea who Chris Messina or the Dowdles are, but if M. Night Shyamalan has something to do with it I AM THERE. That man is a cinematic genius. Just like Rob Zombie.