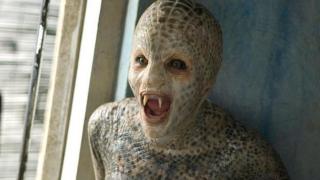 If you like snakes, Bollywood, and director Jennifer Lynch, then you're in luck! The first set of posters for Lynch's upcoming horror flick "Hisss" have been released online. A movie about a snake woman's quest for revenge? You already know I'll be all over this one.

Yoshihiro Nishimura, the mastermind behind "Mutant Girls Squad" and "Vampire Girl vs. Frankenstein Girl", has begun production on his latest gore-soaked endeavor "Hell Driver". The plot: Japanese schoolgirls battle the undead in Tokyo. Life just got a little bit sweeter.

Speaking of quirky Japanese horror flicks, the trailer for "Neck", a film about a guy forced to watch a horror movie generated by his own mind, is ready for worldwide consumption. And people wonder why I spend so much time watching foreign horror movies.

Have you secretly wished for a horror flick featuring a killer tire? Me, too! Magnet Releasing has apparently acquired US distribution rights for "Rubber", a film about a murderous tire with telekinetic powers. This has been an awesome week for people with bizarre taste in cinema.

And here it is folks, despite all his blustering about shooting for an "R Rating", word has spread today that "Terminator Salvation" will be PG-13. Keep in mind that the source of this is an affiliated Pizza Hut site that's doing cross promotion, so I suppose it's possible they got it wrong. But it looks pretty official to me. I would expect some type of PR announcement soon considering all the coverage this story is getting.

Today's awesome indie title: "Destined to be Ingested". Do I care what it's about? Not really, but I'm guessing cannibals.

Jennifer Lynch talks about "Hisss", her "love story-action-comedy-musical-creature feature", which also happens to star a Bollywood actress in some sort of hot human/serpent hybrid costume. This is David Lynch's daughter after all, did you expect it to make sense?

Win a walk-on role on "The Crazies" remake through an auction. Just remember, if it turns out like "Friday the 13th", you're there for eternity, people!

Kyle Gallner, from "The Haunting in Connecticut" is now officially cast in the "Nightmare on Elm St." remake. He will be playing "Quentin", who also happens to be a podcaster. He was really solid in "HIC", so I would say that BGH is officially on board with this news.