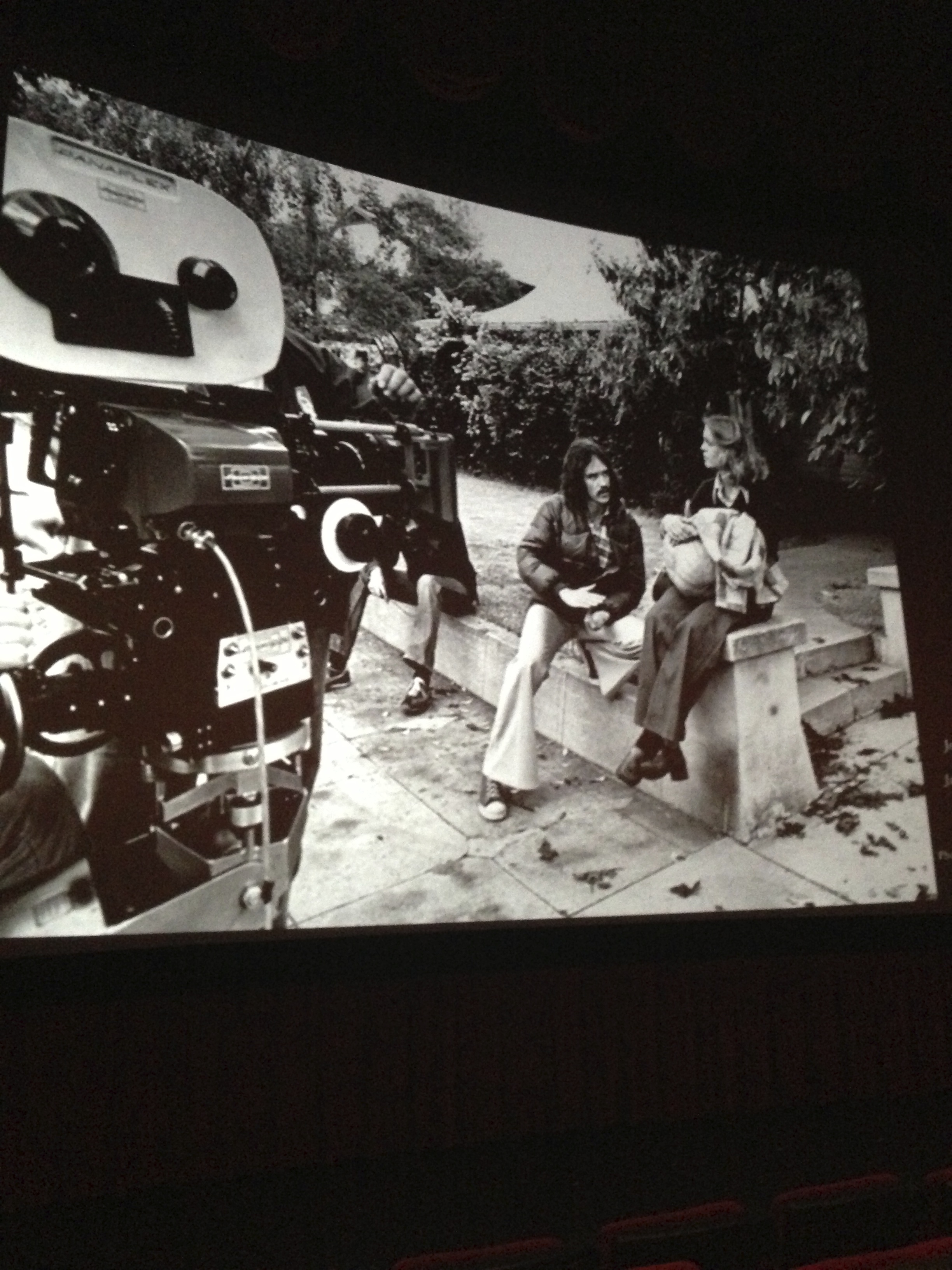 Event number two for John Carpenter this month! If you haven't yet, check out my last post about the anniversary screening for John Carpenter's "The Thing". He did a round of Q&A then too and surprisingly the questions asked this time were all different than from before.

The Los Angeles Times held their Hero Complex Film Festival this last week and kicked it off with a double feature fest for Mr. Carpenter. Held at the infamous Grauman's Chinese Theater on Hollywood Blvd., the night started with a brief introduction from LA Times reps explaining the itinerary for the night. Immediately after, "They Live" jumped on the screen and the night began! This was my first time seeing "They Live" in a theater and with a mixed audience of press. I was expecting some strange or silent reactions from everyone but the crowd was having a great time. Everyone chanted, "I came here to chew bubble gum and kick some ass. And I'm all out of bubble gum." The part about the film that I always forget is what seems like the longest fist fight between Roddy Piper and Keith David. I mean, they put Rocky to shame.

Once the film ended, Carpenter came out and an LA Times rep did a brief interview with him and afterwards press were allowed to ask direct questions. Here are some of the highlights:

[In reference to "They Live"]
LAT Rep: "Would you say this is your most political film?"
Carpenter: "Yes, it definitely was. It was mixed feelings. I could've softened it but the rage for Reaganomics just led me to it. So, I couldn't help myself."

LAT Rep: "And the fist fight scene took three days to film?"
Carpenter: "Yes."
LAT Rep: "Was there any discussion to not make the fight scene go on that long?"
Carpenter: ".....No." (If only you could've heard his delivery, it was just great.)
LAT Rep: "Would you say that was because there was no studio rep there to advise?"
Carpenter: "Oh, it was fabulous. I think that's why we got away with it. I don't think they'd let you get away with that. Especially today."

LAT Rep: "So, Keith David and Roddy worked together, what was the chemistry like between them?"
Carpenter: "Well, they came from different worlds. Keith was a Juilliard trained actor. Roddy Piper was a pro wrestler. So we spent time rehearsing and what I had them do was go out and have lunch together in character. I didn't need to be around, I just wanted them to go out and have lunch at some diner and they did fantastic together. I think they both just received a fight of the century award."
LAT Rep: "A well deserved award."

LAT Rep: "I read recently that you believe that in film aliens should be evil and movies should have dark endings when possible. I was wondering if you still found those to be true?"
Carpenter: "Sort of, yeah. I definitely think aliens shouldn't be good. Cause then it just pisses you off. They should come to attack us, so we can attack back. And I think dark endings can be fun. But audiences hate dark endings and ambiguous endings. So I made one with both."

[In reference to "Halloween"]
LAT Rep: " Obviously the movie features Donald Pleasance. And the two of you made a good bond."
Carpenter: "Yeah, we became really close friends. Donald told me he didn't know why he was making 'Halloween'. We had lunch before shooting and he said that his daughter had seen my last movie and liked my music and she told me to take the job. What Donald was doing was testing me. He loved to know he was wanted. He wanted to feel important. He tested me on Escape from New York. He wanted me to write an essay stating why he should play the President of the United States. So I wrote him an essay."

LAT Rep: "I also heard that you find writing actually very difficult?"
Carpenter: "This probably stems from the fact that I stupidly decided to produce 'Halloween 2'. Stupidly because I didn't think there was anymore story to tell from the first film. When you go to see it, I thought, that should be it. But no, so they turned to me and asked me to write the script. It was such a pain writing that script. A six pack of beer a night, sitting at the typewriter. It was awful. I think my heart just wasn't in it."

Carpenter once again left us with the explanation that he had to meet up with his drug dealer. I heard that joke the last time, but it still got me. Nice play, sir. Throughout the interview segment about “Halloween” there were behind the scenes photographs by Kim Walker playing across the screen. Images of Nick Castle finding his spot in the bushes as Michael, Carpenter explaining something to Jamie about her character, and even a shot of Jamie holding Michael’s knife while laughing were some examples. For a huge “Halloween” fan these were an awesome look into what the atmosphere on the set looked like.

Finally, the screening of “Halloween” began and I have to say that it’s always a pleasure to view his masterpiece on the big screen. The crowd was actually rowdy like I mentioned before, but they were silent throughout most of the movie. Apart from being a witty and talented director, Carpenter has proven that he crafts suspense and horror that withstand the test of time. Special screenings of his films will play for years to come and audiences will be taken back to his original intent. I for one was proud to be in attendance and would gladly find myself at his next event.