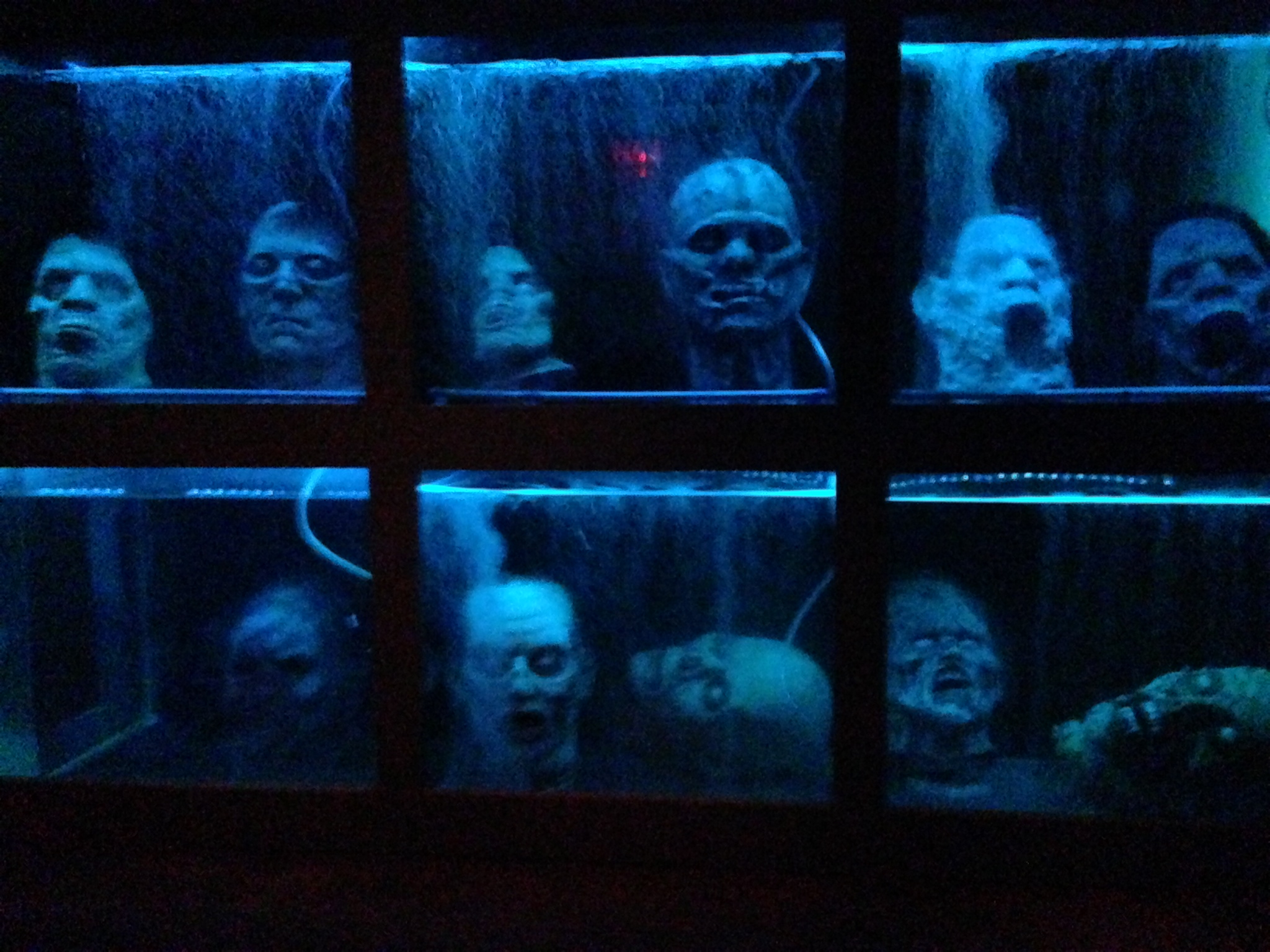 It’s that wonderful time of year again! Horror movies playing 24/7 on cable, the masses planning their Halloween party costumes, and the theme parks turning their family friendly parks into blood and gore infested lands of horror!

I am frequent yearly visitor to the horror parks in the Southern California area, but one place always stands out amongst the rest. Universal Studios Hollywood Horror Nights takes the magic of the movies and gives it the horror treatment. Taking different genre films from the past and present, creative director John Murdy transforms different sections of the park into movies come alive! The famous Universal backlot where films are shot every day and housed the original Universal monster films of the early days like “Dracula”, “Frankenstein” and “The Invisible Man”, are turned into he land of the “Walking Dead” television series. Getting to run past Bates Motel while being chased by zombies is just the beginning of the fun. I decided to give my rating of the film based mazes and scare zones for all of you Bloody Good Horror fans. I tried my hardest to get a ton of pictures but it is extremely dark and flashes were not allowed. I’ll just say right off the bat, if you have a chance to go to the Hollywood or Orlando iterations, go for it!

“Insidious” (Score: 9/10)
James Wan gave us the terrifying and well made “Insidious” back in 2010, and this year Universal brought that terror to their parks. The maze begins with a replica rebuild of the Lambert’s home. Voice overs of Rose Byrne delivering her eerie thoughts on the haunted house play throughout the house which makes you feel like you’re right in the middle of the movie. The detail that was put into the maze is outstanding. I’ve only seen “Insidious” three times, with my last viewing being over a year ago, but right when I stepped into the house the entire film came flooding back. As you step further into the house (ha! The further....cause it’s called “The Further” in the...movie...okay.) the scene where Elise, Specs and Tucker channel the demon plays out right in front of you. This is where we get the first glimpse of the red faced demon. My oh my is that creepy! The house starts to dissolve away and we find ourselves in The Further. Just darkness and plenty of fog to get the mood right. Eventually we end up in the red demons lair complete with Tiny Tim music blaring as you try avoid the demon from seeing you. All in all, this maze did a fantastic job of capturing the eeriness of the movie while making you appreciate the craftsmanship that went into it all!

“Evil Dead (2013)” (Score: 7/10)
We all saw the remake of the classic “The Evil Dead” that kicked off 2013. The big guys on the BGH podcast liked it, and so did I! The maze took the approach of guiding you through the experience that Mia had being possessed. We start in the thick woods with flashes of Mia running through the trees and ultimately being caught in the thorns of evil!! Once you set foot in the cabin, all hell breaks loose, literally. The floorboards fly open as demon Mia grabs at your legs and her friends rush over with detached limbs groping for help. Eventually you make your way to the basement where dead cats are hanging everywhere. The smell. Oh goodness, the smell!! In case you ever wanted to know what a room full of dead cats smells like, then Universal is the place to go. It truly adds the feeling that this is all “real”. Sadly the maze loses its fervor once you leave the cabin. We see the “abomination” fighting Mia but they let a huge opportunity to drench us in fake blood go to waste. A great maze, but was missing a few special moments.

“The Walking Dead” (Score: 8/10)
First off, I just have to make it clear how popular this maze was on the night I attended. The wait was well over two hours and was only one of two “Walking Dead” attractions at the park. Located on the backlot, you are required to take a tram to the European streets and make your way to the line for the maze. As you wait, giant screens project different Universal horror movies which was a welcome inclusion due to the long wait. Now this maze focuses on the prison from the series. As you can see from the pictures I provided, they recreated the prison in an amazing way. The closer we got to the entrance, the more I felt as if I was really in the world I watch every week. Before you even enter the doors of the prison there are zombies gnawing at your arms and legs. One zombie got so close that I felt the hairs on my arms getting nipped. The interior of the prison was designed so closely to the shows that I was trying to determine which cell was the one that housed each character during season 2. Unfortunately there was a lack of zombies in the prison portion, but you make your way into Woodbury and the governor’s room. This was the greatest part of the maze. The wall of aquariums housing zombie heads loomed ahead and as you focus on the details, the governor’s daughter suddenly bursts out of her cage and attacks! It was a great jump and tie in to the show. A great maze, just missing more zombies.

There were three other mazes in the park, but were unrelated to films. “El Cucuy” was based around the Spanish folk tale; “Black Sabbath 13” housed the music of Black Sabbath with 3D gore; and “Universal Monsters Remix” was a giant castle holding all of the classic Universal Monsters but with house music pumping throughout the hallways. There is also a live “Bill and Ted’s Excellent Halloween Adventure” show if you feel like having some laughs. Overall, the experience is a great one. As a lover of horror movie, I appreciated the detail that was put into each maze. The fact that I got to walk through the Lambert’s house and see Mia’s transformation in those deep woods made this an experience worth every penny! Let us know in the comments below what your favorite maze was at the Hollywood or Orlando locations. Or if you had the chance to experience a different horror park, let us know!