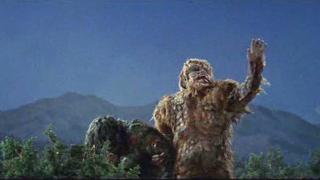 War of the Gargantuas

"Glee" fans rejoice; show star Cory Monteith has joined the cast of Jamie Babbit's "Breaking the Girl", a story of manipulative college girls suckering others into killing for them.

John Carpenter is working on his latest film "The Ward", and is now releasing pre-production diaries on his official site.

Kevin Williamson talks "Scream" reboots. As of now, the only real word is "It's going great!", with a few minor details.

In the 'do they really think people will buy that' department, details have been released for the Blu-ray edition of Roland Emmerich's "Godzilla" remake.

Because we did it so well the first time, it looks like Legendary Pictures are in talks to bring back an Americanized version of “Godzilla”. While this news is quite maddening, what's really aggravating is how every movie news outlet that has picked up the story has used the headline “GODZILLA ROARS AGAIN!”. Seriously, guys? Maybe I expect too much for a guy with the moniker of “Mr. Disgusting”.

So, if the “Godzilla” news didn't screw up your morning, well, here you go: MGM has put the remake of “Poltergeist” on the fast track. Here's to hoping that the new Carol Anne lives to be 13!

Even though the movie won't be ready for another 37 years, Universal has released some new stills for The Wolfman. Is it just me or does Benicio Del Toro look like a cross between an almost transformed werewolf and Jet Li?

Is it weird that I've jerked-off to this video twice now?