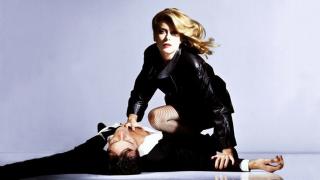 Join us at the sexy goth vampire sex club.

I think the last time I saw a Julianne Moore movie I liked she was asking The Dude to plant his seed inside her. It's been a while. But good news, her next project is a witchs come to F crap up tale titled "The Seventh Son" and co-stars The Dude himself Jeff Bridges. Bad news, the project had already had its release date pushed once and now it's happened again, landing a January 17, 2014 outing now. Pray someone loses a toe.

It's probably been more than 20 years since I saw "Jacob's Ladder" and I'm not going to lie, it confused the holy living hell out of me. IMDB tells me it's about a Vietnam vet who starts to go nutso and seeings weird ass crap after the loss of his child. Not in those words exactly but you get the idea. My point here is I keep meaning to go back and watch the film again but now I don't have to because a remake is on it's way. Jeff Buhler, the fella who wrote "Midnight Meat Train", will pen the script and god willing he will dumb it down so I can understand it.

Crap, we completely forgot to celebrate last Wednesday. What was the special occasion you ask? Why it was exactly 2 years to the date before we get the new "Terminator" movie. I know, June 26th, 2015 is right around the corner, I'm really excited too.

David Bowie has been offered a role on the next season of "Hannibal" according to the show's creators. No word yet on if Mr. Stardust will take the role, but word has it he would be playing Hannibal's uncle on the second season of the NBC show. The good news here is I use to not really like David Bowie and now after hearing his music for about 30 years I've grown to really enjoy his work. So look out "Hannibal" producers, you might just have a new fan come 2043.