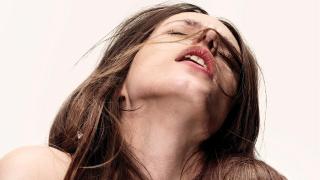 Wanna hear us fight? Listen on!

The first clip from Lars von Trier's end of the world movie "Melancholia" has hit the tubes and while it's imposable to see Charlotte Gainsbourg without thinking she's about to destroy someone's genitals I have to say this flick looks fairly tame. Then again there's nothing you can do about the snaggle tooth action that is Kirsten Dunst. Mutilated genitals or not, that toothy mastermind will destroy us all.

Gary Busey? Sure! David Hasselhoff? What in the holy living hell is going on. Of course if I were to ask you to guess what horror movie the Hoff would be cast in the obvious answer would be "Piranha 3DD" so this should come as no surprise but still he's been confirmed for the sequel that will take place at a waterpark. Charlie Sheen is next, right? It can't be far off.

You know that morbidly obese girl at your office who is always saying things like "I sooo need to go on a diet" and "Oh wow I super need to get back to the gym" in the hopes that you'll tell her she looks great and doesn't need to change a thing? Well here's the people from Dimension Films taking to twitter to ask the 15 people (11 if you don't count us on the podcast) that saw "Scream 4" to tweet how bad they want to see a 5th installment. Get on the treadmill Ghostface, your fat ass isn't going to tone itself while you sit on the couch and play "Call of Duty".