Matt Reeves has confirmed that "Cloverfield 2" will 100% happen and that J.J. Abrams is for sure involved. Good news if you liked the first. Of course he has absolutely no idea when the film is going to happen so it's most likely going to be a while. Which is good news if you hated the first.

Seth Grahame-Smith may be given the opportunity to co-direct the big screen version of his book "Pride and Prejudice and Zombies" along with David Katzenberg. I will go on record as saying that 100% of movies directed by the author of the book it was based on have been awesome. Keep in mind the only one I can think of is "Maximum Overdrive" though.

In "hey I bet we can get these horror geeks to pay for anything" news the good people Shriek Show will bring the cult classic "Zombie Holocaust" to Blu-Day on April 19th. No confirmation on the extras but I assume there's a 5 minute video of the president of Shriek Show laughing hysterically because you paid 30 bucks for a movie that still looks like it was recorded on your parent's VHS camera.

"Wood Wake" director David Keating has tossed his hat in the ring to direct the Hammer Films remake of 1942 classic "Cat People". How do we close the door on this one? Do you need my approval? You can consider this my official approval. You're welcome, Keating. 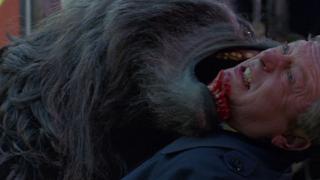