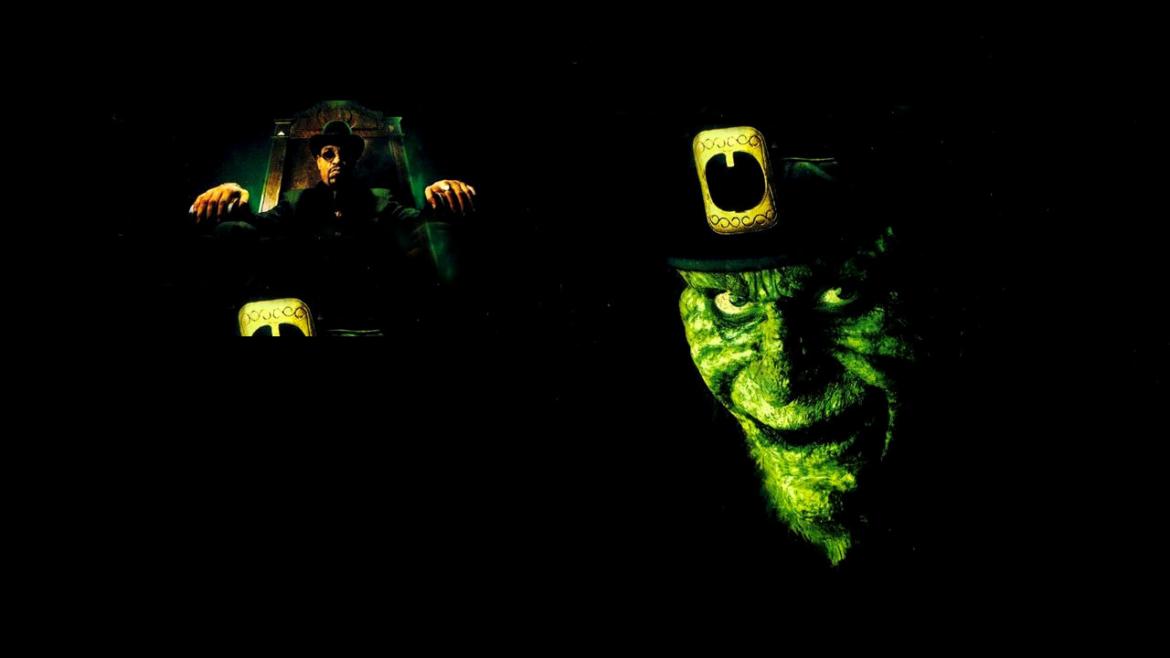 Leprechaun in the Hood (Movie Review)

Easily the most notorious film in the franchise, Leprechaun in the Hood is a later entry in the series that jumps the shark so far that they're not even on the same radar. Leprechaun 4: In Space followed the same grasping for straws style of Jason X and Hellraiser: Bloodline by jettisoning the green tinted killer into space and delivering nothing but quirky smirks to the audience. Apparently the only logical step after space was conquered was for the Lep to head back down to earth and right into the hood. Thankfully this oddball choice lives up to its grin inducing title by focusing simply on placing the Lep within the stereotypical Compton. Of course, the attention to keeping the script politically correct is non-existent which could be a turn off for a number of viewers. For those ready for an eye-widening good time then Leprechaun in the Hood is that little extra bling to add to the campy collection.

The film begins in the 1970's as Mack Daddy O'Nassas (played by Ice-T) searches a nearby abandoned nightclub with the help of a map supposedly leading to riches. What he finds is the leprechaun formed into stone by the power of an ancient necklace. Mack Daddy also finds the Lep's magical flute which has the power to control the minds of anyone who hears its mythical tones. Stealing the flute and the Lep statue, Mack Daddy goes on to become a megastar in the hip hop community. The film then flashes forward to the modern millenium as three young rappers with their own agenda begin their journey to finding music stardom. Postmaster P heads the group as the rapper delivering positivity instead of violence in his lyrics, while Stray Bullet and Butch offer up their own desires for riches over promoting a positive message. When Mack Daddy turns the three down from a record deal, Stray Bullet convinces them all to break into Daddy's office to steal some of his wealth. They do, but in turn they also release the leprechaun and attain the magic flute that gained Mack Daddy all of his success. Now with stardom at their fingertips, the trio performs as often as they can while also keeping clear of the Lep's deadly vengeance and Mack Daddy's thirst for revenge.

What makes this entry work so well is that it takes its setting and beats it into the ground. It's not ashamed of what it is, and that's refreshing for a franchise that has often tried to be on par with the mega slasher icons. The Leprechaun does everything that one would imagine he would do in the hood including rap, make racist jokes, and exploit drugs.

Surprisingly the plot also has more of a focus than the previous entries. The motivation of getting the flute back has a level of logic that works well with how the rappers use the magic. The flute controls minds which is a powerful tool for the Lep to have, but it also works extremely well for a story revolving around making it big in the music industry; an industry that's all about gaining as much attention as possible. Postmaster P is a standout character as he is the the one pushing for morals and leaving the mean streets of Compton. His character does make terrible decisions, including shooting Mack Daddy, but it all works within the overall over the top narrative. What's important to stress is that the film is very aggressive toward certain stereotypes and can easily offend anyone. At one point a prostitute undergoing a sex change operation enters the film and the Leprechaun calls him a "fruit". No one in this film is safe from stereotyping.

This movie gets into such an offensive territory that it feels like a purposeful choice, much like a Borat type scenario. Overall the Leprechaun in the Hood is entertaining for what it is. It is absolutely terrible, but knowingly so, which is a refreshing twist for the franchise.