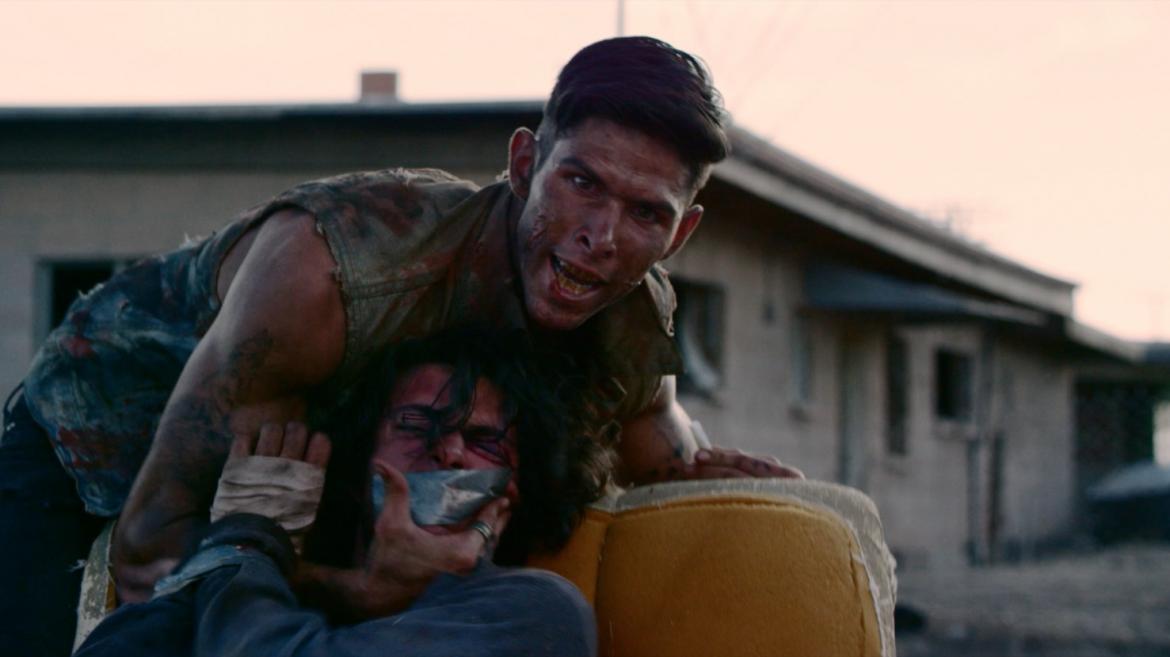 There is no pleasure in crapping all over the hard work of many when putting together a small indie genre flick. Similarly, there should be no pleasure in your work crapping all over the genre fans that decide to give your small indie flick their time of day. There's a middle ground somewhere in there that with an open mind and reasonable accommodations that Chris von Hoffmann's debut flick, Drifter, could be appreciated as being conceived with the best intentions that also needs an audience willing to overlook its flaws. This is not one of those times.

On a fundamental level it would be a stretch to say that Drifter even has a plot to extrapolate from whatever the hell is actually going on. Basically, what we've got is a pair of brothers driving around running into unsavory characters before winding up in a lawless town inhabited by cannibals. Now, you'll have to do a lot of mental laps to come to any conclusions as to any of the "action" going on around the film's structure. For example, there are vague references to the idea that we're dealing with some sort of post-apoctalyptic setting. There's no solid evidence to back that up aside form the fact that there's a whole lot of bare landscapes and a run down town full of people who say things like, "Where'd you get that car?" or, "Having a car is like asking for trouble".

Hoffmann has a grasp on gritty visuals and the setup, for all its confusion, is intriguing right off the bat. The problems stack up along the way in that the story begins going nowhere fast. There's little to no character development that's substantial enough to care about the characters or their fate--let alone any scrap of info to get a footing for the world they are living in. Is it a dystopian future or just some forgotten area of the world with a seedy population that's lost all grasp on normal behavior? It's never clear. Even Hoffmann's setup has its claws wrapped nonchalantly around Robert Rodriguez and Tarantino-isms--up to and including an idea ripped right out of From Dusk Til Dawn.

As Drifter progresses aimlessly through its blurry landscapes and bizarre confrontations it's hard to ignore permanent scowl that develops as the viewer. The nifty synth score tries its damnedest to distract from just how little plot there is and how its just a modge podge of elements from various genre films. Eventually, all Hoffmann feels is necessary to constitute entertainment is whacky characters cackling like cartoons and chewing the scenery in the most abnormal ways possible. No one chews said scenery quite as long and hard as Anthony Ficco. Ficco's character, Latos, swaggers around the screen like the cannibal hillbilly version of John Bernthal's Walking Dead character, Shane. Even still, the performances themselves are not bad in a traditional sense, but ring hollow and carry little to no weight.

Bottom line, the dude sweat and caked on grime of the world created by Hoffmann here is pungent--and with such disregard of characterization Drifter's stench lingers like the dog poo that's stuck in the treads of your trashy tennis shoes that should have been thrown away years ago. Hoffman's stylish do well to persuade you that Drifter might be more hitching a ride on, but quickly spins out of control and nose dives into the sewer.