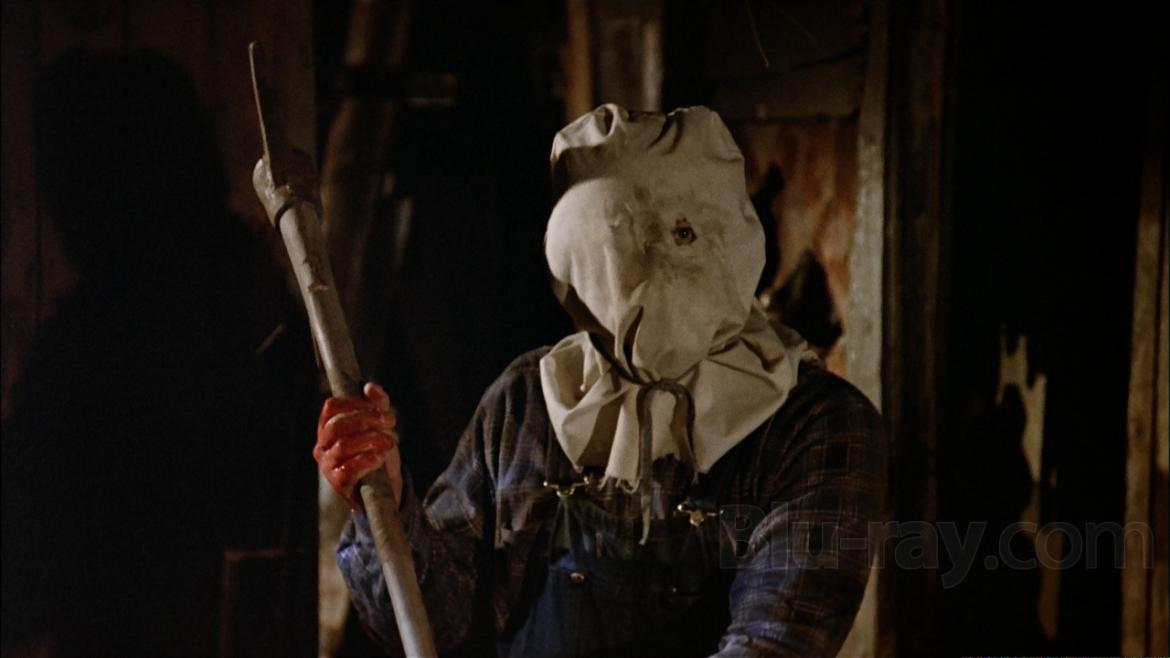 This is the second installment of head-to-head reviews between the A Nightmare on Elm Street and Friday the 13th franchises. Check out what Sophie had to say about the corresponding Freddy pic here!

With the success of the first Friday the 13th, the minds behind the Camp Crystal Lake killings knew that a follow up was inevitable. Releasing just one year later, Friday the 13th Part 2 brought viewers back to the slasher summer camp setting with a few twists on what had come before it. The most intersting aspect to the film is that it had no slasher sequel template to follow as the filmmakers of the original followed Halloween as a blueprint. With Mrs. Voorhees with no head and a cliffhanger of an ending, writer Ron Kurz and director Steve Miner had a few roads to travel in unraveling more of the slasher franchise. While Friday the 13th Part 2 definitely feels like a sequel, it also contains the spirit of a new creation in the form of Jason Voorhees. The camp slasher foundation continues its build, but the introduction of a soon to be iconic killer makes the film feel fresh and exciting with a surprising attention to detail.

Alice Hardy has survived the attacks of crazy Mrs. Voorhees and decides to gain back her normalcy in a summer vacation home. The dream of a decomposed young Jason still haunt her, as does the head of Pamela flying from her neck. Sadly for Alice, Jason has returned to avenge his mothers death and she is the first target to pick off. Years later, a camp not far from the events of the first film is readying its cabins for new youngins to experience the joys of the summer outdoors. Of course a cavalry of counselors is present early to set up camp and have some naughty fun. Among them is Ginny Field, a psychology major with a deep interest in uncovering the mommy issues that young Jason would possibly have with Pamela. The festivities of a new camp stir up the young adult Jason and he begins to shave down the number of counselors using every trick in the book; machetes, rope, wheelchairs, barbed wire, and a spear. While the remaining counselors head to town for a night of drinking, Ginny heads back to the killer carnage and becomes the new final girl for Jason to track.

The timeline for the Friday the 13th films begins to feel hazy with even this second installment. At the conclusion of the first film, a young Jason pops out of the lake to grab Alice for one final scare. When the second film opens, there is a reference to the attack with a dream sequence, however its unclear if that event actually occurred or if it was a post traumatic response from Alice after what she endured with Pamela Voorhees. Clearly a well bodied Jason is performing the murders in this iteration, so the question remains if he actually did drown as a boy, or if he was hiding for years in the woods as his mother went on a murderous rampage. Regardless, it's a question that makes the film intriguing, even after looking back on it with the knowledge of an entire franchise ahead. The birth of the Jason character here is strong with the burlap sack as his mask that adds to the psychotic homemade aspect of his being. Placing a great number of counselors at the beginning was a good tease for a slaughterhouse of a film, however once its clear that half of them will be off drinking all night it brings back the claustrophobia of the original. The kills are all fairly varied and interesting to show that Jason has a method to his madness. The lead character of Ginny is interesting due to her background in psychology. The story does a decent job of referencing it enough to allow for the finale scene to work well as Ginny pretends to be Pamela and coax Jason to calm himself. In fact the entire finale sequence is a strong one due to the back and forth suspense, violence, and gross out moment when Ginny wears Pamela's old sweater.

Knowing where the character of Jason evolves as the franchise continues, the entry feels particulary special as it shows the killer in his most animalistic of modes. The original Texas Chainsaw Massacre showed a Leatherface just trying to keep his home free of unwanted guests. The Jason of Friday the 13th Part 2 has a similar feeling as his camp home is becoming overrun with counselors and their small dogs. Its a modern teen world melding with the backwoods country rube long before movies like Wrong Turn appeared. While it is a sequel and falls into the trappings that label creates like a constant need to refer to the past and outdue it, Friday the 13th Part 2 is one of the more solid in the entire franchise purely for its insecurity in what to do with its killer. The homemade aspect of Jason's entire being permeates the entire movie making the package feel warm and comforting. It stabs the viewer in the back in the best way possible.

Most Creative Kill: The opening kill of Alice is not only reminiscent of Psycho as it eliminates the title actor, it also is done in a mysterious fashion that Scream would harness years later. The final girl is reminiscing on the past events at Camp Crystal Lake when suddenly the feeling in the air changes. Out of nowhere an ice pick impales Alice in the face. It raises the terror and also the question of who this new killer could possibly be.