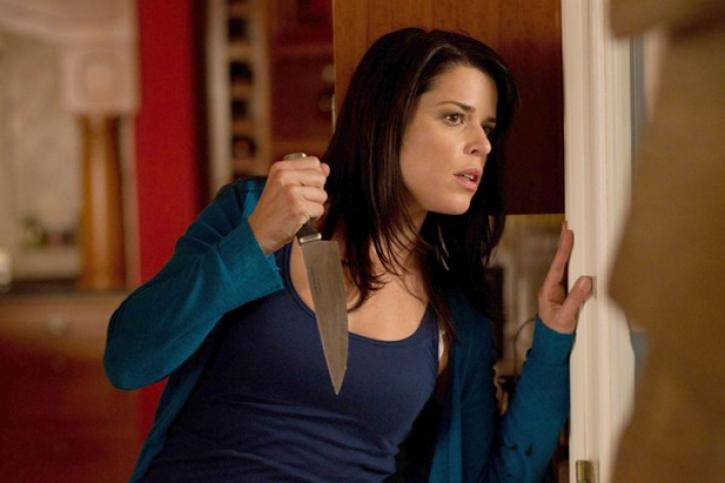 The original "Scream", released in 1996, was in many ways a movie out of place in its own decade. For starters, it was "one of those slasher films", a term in itself that did nothing at the time but promote jeers from anyone within earshot, due mostly to a decade's worth of dead-horse beating sequels attempting to cash in on the wave of successes from the early 80's. It was also a small, suspense driven movie in the decade of the CGI laden mega-blockbuster. If it didn't have a dinosaur, Will Smith or Nicolas Cage's five-head in it somewhere, America wasn't all that interested in your movie in 1996.

Where other films from the period were just beginning to toy with the notion of breaking the "Fourth Wall", (a term which originated in the 1700's to describe the imaginary line between a play and the audience watching, a sacred thing not to be broken) Scream tore down the wall with reckless abandon, got its hands dirty, and played with its audience's own sense of voyeurism (taking the genre back to it's roots first laid down in 1960's "Peeping Tom"). Last but certainly not least, it injected humor into its premise while still trying to be scary, a thing that hadn't been done successfully in a long, long time.

It was, of course, a huge success despite and perhaps because of the things that made it so different at the time. I can't help but think it fitting that 15 years later, "Scream 4", the sequel/remake/reboot that it is, is similarly out of its element. "Scream 4" is a film that finds itself coming off the heels of a decade where every horror filmmaker savvy enough to play to genre fans decried the "Scream" era of horror as an abomination. In addition, you don't find many mainstream horror films that dare to blend comedy into the mix these days, and for real, when was the last time you saw an actual number after a movie title? In this cynical, brooding, re-modernist period of genre cinema, is there a place for Scream 4? And more importantly, what exactly is this film?

One does get the feeling, having followed the development of "Scream 4" on and off for about two years now, that the Wienstien's desperately wanted to give "Scream" the full remake treatment. It would have solved a lot of problems, both continuity and salary wise, but alas it was not to be. I suppose what ultimately ruined their chances of doing things their way is the simple fact that "Scream" really wasn't released that long ago, at least in movie years. This wasn't like remaking 70's films in the late 90's and early 00's. With "Scream 3" having been released only in 2000, chances are that even the young teen demographic has a passing nostalgia for the originals, a sense that could potentially have been offended by a full reboot.

What we're given instead is a hybrid of sorts, a distinction the script plays with at several points. Gayle Weathers, Deputy Dewey (now sheriff), and the final girl herself Neve Campbell all return to Woodsboro for this installment. Gale and Dewey are living a quiet suburban existence that we learn early on Gayle is none too happy with. Sydney, affectionately nicknamed the "Angel of Death" by the new teens of Woodsboro, is doing her best to appear phoenix-like, having come out of hiding, and written a book decrying her victim-hood as a way to help others do the same. She's come to Woodsboro on her latest book tour, accompanied by her plucky publicist Rebecca Walters, played by "Community" star Allison Brie.

The accompanying cast of teens consist of Sydney's niece Jill, played by Emma Roberts, her best friend Kirby (Hayden Panettiere), her ex-boyfriend and a few requisite movie geeks. If thinking back to 1996 makes you feel old, sitting through the credits and realizing one of the teens is played by Macaulay Culkin's brother, Rory certainly will. There of course are a whole host of the cameos here as well, and even lovable old Anthony Anderson shows up in a small role as a police officer.

By far, Kevin Williamson had the hardest job to accomplish in making "Scream 4". He had to find a way not only to blend the stories of cast both new and old, but he had to deal with an audience that was savvy to the originals, the rules of the originals, and the new and ever evolving rules of the last 15 years of horror as well. He seems to do his best to dispatch the expectations from the very beginning, where a double, impossibly meta false-start serves as a white flag on his part. It's as if he's saying, "here's your clever opening, I'm never going to top the original, now let's try to make a decent slasher movie".

The other half of the "Scream" equation, director Wes Craven, has a much less difficult job to accomplish here. With Williamson's pen guiding the way, all Craven had to do was point his camera at scary things, a skill he's honed over 40 years of genre filmmaking. Of all the "Scream" sequels, this one comes the closest to recreating the atmosphere of the original, and that's a direct testament to Craven's handiwork. To say that these words come as a surprise to me after viewing his last film, "My Soul To Take", is the understatement of this short decade. After "Scream 4", I'm officially back to giving Wes Craven the benefit of the doubt, as long as he's not writing his own material.

The "rules" this time around are all about breaking the rules of the past, and to an extent it's something the film accomplishes. While never quite recreating the red-herring extravaganza of the original, they do succeed by fashioning a few moments where you question the intentions of supposedly unquestionable characters. For a long-time fan who payed good money to see Scream 3, this willingness to attempt to push the envelope was greatly appreciated, and necessary.

It's also a pretty brutal film, at least by the original trilogy's standards. Craven and Williamson fulfill their promise of cranking things to "11" for this outing gore-wise, although a few more of the promises from the trailer "rules" go unfulfilled… specifically that we would get "nudity for a change". Oh well, next time I guess. One imagines a blackboard in Williamson's office with each potential plot point containing a branching decision tree with each possible outcome, and the predictability level of each scenario so that he might pick the optimal one to achieve audience satisfaction. It's not exactly an organic way to write a movie script, and the over-thinking does show itself at times. Although if Williamson was forced to overthink the plot here, I suppose it's really because we as horror fans tend to over-analyze everything and beat a film to death until we've deprived ourselves the ability to actually enjoy it… a rabbit hole I'm not willing to venture down at this particular moment.

What Williamson does successfully here, that wasn't done in either sequel, is give each remaining original cast member a really strong story, a reason for being there in the first place. In both sequels but especially 3, Gayle and Dewey are always sort of in the background "investigating", but never a truly integral part of the story. Here all three original cast members are brought into the fold in very thoughtful ways. This mixed with what I assume are believable teenage characters (sadly, I'm not in the position to know anymore), make for a surprisingly well rounded return to Woodsboro.

"Scream 4" isn't going to make fans out of those unwilling to give the series a break. It probably will however please most fans of the original trilogy. Based on the Friday box office numbers, it seems like it's going to please mainstream fans as well, at least enough to keep the Wienstien brothers rolling in cash for a few more months (and thank God for that, I was worried). If I have a complaint about anything, aside from a few of the more egregious one-liners, it's that they could have pushed much farther in breaking the rules, especially where the original cast was concerned. Even if you kept the ending, which I enjoyed heartily but won't go into here in order to avoid spoilers, in the end it stays just a little too safe and "happy" for me.

Maybe that was Williamson's last stand against the critics of his brand of horror. Maybe he was trying to rebel by keeping that little bit of the doe-eyed, innocent 90's cinematic influence in there. Then again, maybe some old guy at the studio wanted to make sure the audience felt warm and fuzzy by the time it was all over. Either way, it is what it is… and really, so is "Scream 4".

And now for a little personal plug from your Editor-in-Chief... If you're interested in more of my thoughts on the "Scream" series, of which I have many, be sure to pick up Issue 28 of Horror Hound Magazine, featuring a 10 page retrospective on the series written by yours truly. You can order online or find it at most major book retailers (at least the ones that are still in business). Hope you enjoy.