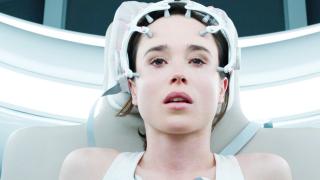 Damon Lidelof is the fella who penned "Lost" and the upcoming movie "Cowboys & Aliens" has been handed more money than I'll ever see in my life to write a new Sci-Fi silm for the fine people at Disney. No real details yet on what the movie will be about but word is the project will extent beyond the cinema. Which could really mean anything. TV show, action figure line or maybe in a few years I'll riding in a car shaped like Lindelof's head on the new "1952" ride at Disney World. It's going to be magical.

A romp of new images from the set of "Piranha 3DD" have hit the tubes and it looks like the blood action at the local water park is in full swing. For the second film a local Lake Havasu water park has been turned into "Big Wet Waterpark" and I assume after filming wraps they either have to detox the entire area or just burn the park to the ground and call it a day. And if you're wondering, a romp is what they call a group of otters. We learned something today!

Mexican actor Diego Luna is reportedly being courted for a role in up coming Neill Blomkamp alien flick titled "Elysium". the film is the follow up to Blomkamp's 2009 epic "District 9" and has already cast Matt Damon and Jodie Foster as earthlings who face an alien onslaught. Sounds like things are going to get caliente on the set my friends! Aye que rico, me pone loca!

John Hlavin who wrote the script for "Underworld 4: New Dawn" is in talks to develop a script for a big screen adaptation of the board game of global domination "Risk". This is just the latest board game to be added to the ever growing list of adaptations and I for one can't wait to see the giant CGI pop-o-matic bubble once someone decided to make "Trouble" a movie.