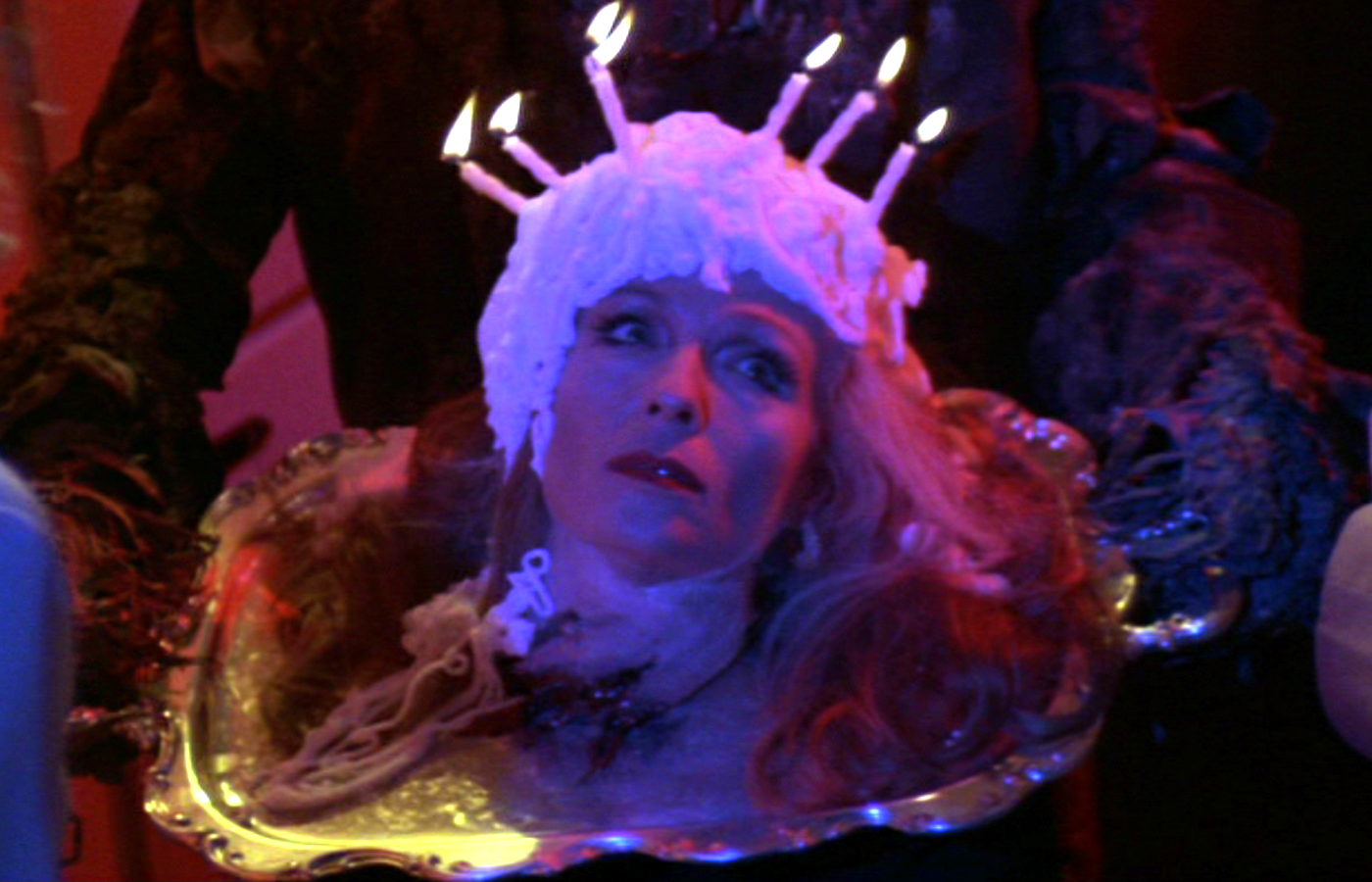 Movie marathons are tricky business. Equal parts foresight, improvisation, impulse decision-making, and nostalgia that you really don’t have all that much control over in the long run. You can plan ahead all you want but the energy of a room can turn a slow-burn pee-pants fest into annoying background noise in no time. Add a holiday on top of things, say for example Halloween, and you got more problems than that Jay-Z character.

The important thing to remember when selecting your flicks is that these are at first going to be public movies so know your audience. You going to be flipping tables and smashing pumpkins? Or you going to be quietly sticking knives in a gourd whilst taking pulls from a jug of Carlo Rossi? (I'm so lonely). To that end we’ve got 12 movies to compliment your preferred holiday tomfoolery. Placed in the order to be screened, I’ve included two options in each of the 6 time-slots to accommodate the meek and the rowdy.

Also, to narrow the field a bit we’re going to put the true classics on hold. Grab some pine Halloween, The Thing, Night of the Living Dead, and Texas Chainsaw Massacre

Date: 1980/2005
Director: Barbara Peters & Jimmy T. Murakami/Billy O’Brien
Really?: You’re getting started so you want something that’s going to draw people in but doesn’t require much active attention. The Roger Corman produced Humanoids from the Deep is where we get things cooking for the hooligans. Light enough to be ignored and still maintain an audience with a mean, weird, and campy as hell streak a mile wide that even the most fancy-pants of horror fans can find some interest in. Then for the PETA lovers out there we got Isolation. A gross, hubris-of-science parable that has some old school tropes dressed in glossier trappings some guests may not be familiar with.

Date: 1984/1990
Director: Ivan Reitman/Adrian Lyne
Really?: Time to kick the scares up a little. Adrian Lyne’s Jacob’s Ladder is one of the unsung influences on horror film over the passed twenty years. It’s surreal spookiness holds up to this day and for those guests unfamiliar it will be a refreshingly creepy surprise that not all 90s American horror sucked. And what do you really need to know about Ghostbusters you don’t already know? Endlessly quotable, witty with touches of slapstick and enough smarm leaking off of Murray you can taste it. (Mmmmm, smarm). Topped off with some great effects from the day when optical FX and matte paintings achieved some oddly surreal moments. “It’s Miller time!”

Date: 1978/1979
Director: George A. Romero/Lucio Fulci
Really?: Every Halloween Movie Fest needs a quality zombie flick. So why not stick with the zombie master’s zombie-piece? Still relevant today with plenty of pink, orangish blood, quality satire, and the score of the century, Dawn of the Dead reigns supreme. And Zombie? A zombie fights a fucking shark underwater. Nuff said.

Date: 1982/1986
Director: George A. Romero/Tobe Hooper
Really?: I know I ruled out Texas Chainsaw Massacre but the first sequel is mandatory viewing if you have any guests that have not yet been exposed to this swaggering hunk of chili meat. Chainsaw duel in abandoned carnival grounds? Of course everyone should see it. On the flipside Creepshow is one of the truly great anthology films if anything because I said so. Anthology’s are great party fodder as well. Guests can get up and come back as segments peak their interests or overstay their welcome. And what’s scarier than creatures hiding under the stairs? Nothing.

Date: 1987/2005
Director: John McTiernan/ Neil Marshall
Really?: Now we move into our “action” movie category to keep the energy up for the home stretch. The Descent is one of the great movies to watch with a crowd. I have witnessed more people scream or jump or squirm at this then most other films. If the insanely effective creatures don’t get you the claustrophobic atmosphere and tense character relationships will. Still in the mood for some creature action but “don’t have time to bleed”? Predator will get you to that chopper.

Date: 1981/1987
Director: Tony Maylam/Sam Raimi
Really?: Always be closing strong. Either The Burning or Evil Dead II are great nightcaps to any evening of debauchery. One an unsung classic of the Slasher era that helped the Weinsteins get their start. The other a manic cartoon covered in goo that will forever be immortalized in cult nerdom.

Honorable mentions include Frankenstein, The Host, Young Frankenstein, Martyrs, The Thing from Another World, Hausu, The Running Man , Deep Red, Jesus Camp, Gummo, Anything with a Theremin