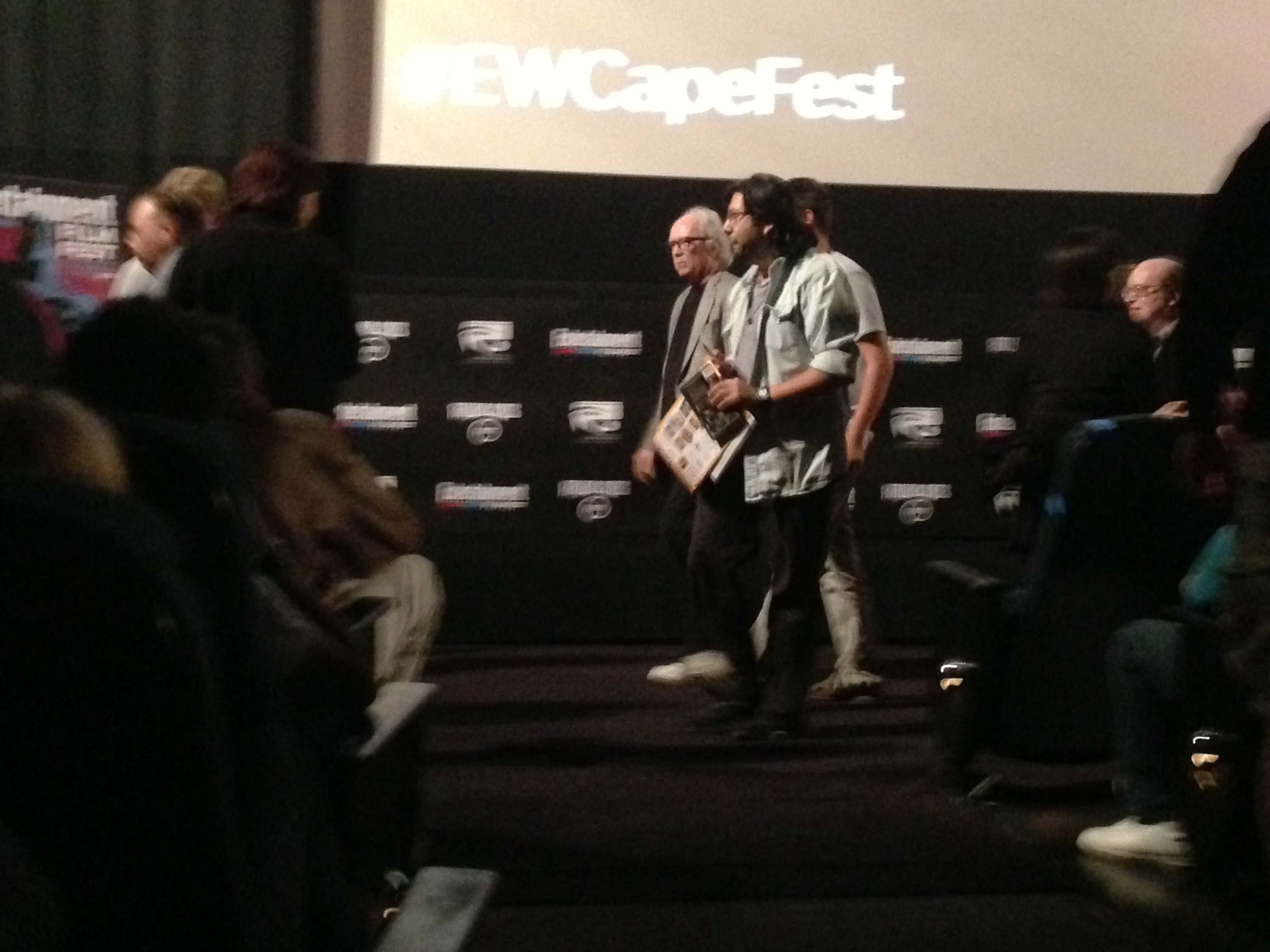 Where do I start in explaining how amazing this night was? The chance to watch “The Thing” on 35 millimeter film, in a packed theater, with John Carpenter in attendance to do some Q&A? I’m in.

On May 2nd, I had the pleasure of attending Entertainment Weekly’s Cape Town Film Festival for its third night in Hollywood, CA. Held at the famous Egyptian Theatre on Hollywood Blvd, the turn out was phenomenal. The festival itself was housing anniversary screenings of cult hits and classic films like “Star Wars: Return of the Jedi”, “The Goonies”, “Shaun of the Dead”, “Escape from New York” and the movie I was there for: John Carpenter’s “The Thing”.

Before I get into the meat of what happened I have to say that it was difficult to get pictures during the presentation. They were sticklers for having no phones out at the event, but I tried to be sneaky so I could bring you all something. So pardon the blurry pictures. I tried!

The night started out with a screening of several of Carpenter’s film trailers in all of their 35 millimeter glory. Being a 22 year old man baby, I had never had the privilege of seeing these trailers in their original run. “Christine”, “Prince of Darkness”, “Halloween”, “Escape from New York”, “The Thing” and “They Live!” were all played to set the stage for the Q&A session. Of course there was tons of cheering and jeering for each teaser which made you feel like you were part of something big. Then, John Carpenter came strutting out, like the rock star he is, to answer some questions. And before you wonder, no, I didn’t ask anything. I’m going to a screening of “Halloween” later this week so I’m psyching myself up to ask him something. Again, 22 year old man baby here, seeing his horror director idol in person was just too much to handle.

There were a few standard questions asked: “What was the hardest part about filming The Thing?”, “How do you feel about people remaking your films?”, “What’s your favorite score you’ve created?” and so on. Of course all of Carpenter’s answers tend to gravitate toward the “I don’t have a favorite” category, and “If they want to remake a movie, that’s fine with me.” which are all answers that I can respect. Someone did finally ask what he’s working on currently and it seems that Mr. John has moved into the comic world. His most recent work being “DarkChylde” since 2011, but he has a new series titled “Asylum” coming this summer. Thankfully a bolder person than myself asked what was on all of our minds: “Are you working on any movies? Maybe with Kurt Russell again?”. With his straight poker face he replied, “Nope. But you never know.”, which made us all go nuts. Especially since Kurt Russell was slotted to do Q&A the next night for “Escape from New York”, Carpenter’s answer gave us all the push to start assuming the heck out of their possible reunion.

One of the last questions ended up being my favorite moment of the night. A man stood up near the front row, causing Carpenter to smirk once he saw his face.

“You’ve worked with some amazing actors in your films. Highly trained and seasoned workers in my opinion. How do you pick these talented people?”

With that grin still plastered on his face, Carpenter responded, “Well everyone, say hello to Brian Andrews. Tommy Doyle from “Halloween”.”

I’d like to take this moment to say that “Halloween” is my favorite horror movie and what got me started with my love for the genre so this moment was everything.

And like that the Q&A was over. Carpenter left us by introducing “The Thing” and explaining he was late to meet his drug dealer. Witty man.

I have to say, I always forget how much I appreciate a packed theater of people who love the genre. Always the right placement of laughter and gasps, it just feels right. “The Thing” definitely delivered a great time and stands to be my favorite theater going experience of 2013 so far. It just goes to show how much a classic can stand strong after all of these years.

This weekend I’ll be at another screening for John Carpenter, this time for “Halloween”. Hopefully I’ll have mustered up the courage to be part of the event I’m reporting. Wish me luck friends, wish me luck.