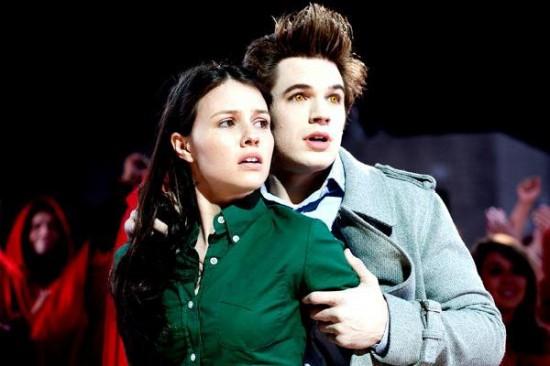 Satires are a delicate beast. They have to walk a fine line between capturing the original story and lampooning their subject with well crafted humor that is pertinent to the source. Sadly, in the realm of horror comedies, this fine art was mostly thrown to the wayside a long time ago.

I'll be upfront and honest here; I've never seen the source material that "Vampires Suck" has sunk it's teeth into. I don't have any intentions to watch the "Twilight" films any time soon, either, so there is a chance that some of the humor here is completely lost on me.

If you haven't figured it out yet, "Vampires Suck" is the first film with some studio backing to take on the glittery undead behemoth. For the record, there are a few direct to video films to have attempted this feat already, they're just not well known. One would think that lampooning a movie such as "Twilight" would be an easy job. In this case, some of the jokes do flow fast and easy. Perhaps it's the sap laden source material making it too easy, but "Vampires Suck" falls prey to a truck load of overly contrived setups and groan-worthy gags. Perhaps the biggest fault in the writing of this film is that there's a constant need to shoehorn current events into the jokes, which consistently breaks any semblance of comedic flow.

From what I can deduce from my limited knowledge, this movie combines the first two films of the "Twilight" extravaganza. They follow along with the plot quick and loose, not bothering to dwell on any one moment for very long. Even at the accelerated pace, the story largely fails without context. Granted, this isn't necessarily the point of a "sucks" film, but you would hope that any film would aim to be mildly interesting or entertaining without needing a primer beforehand.

The saddest part about the forced humor and dull plot are Jenn Proske and Matt Lanter, who's hammy portrayals get the job done but are ultimately overshadowed by the film's shortcomings. Jenn Proske has the annoying emotional ticks of Kristen Stewart down pat, and Matt Lanter makes for a solid Robert Pattinson. By contrast, there's a zany cameo from Ken Jeong in vampire drag, who's performance is heavily phoned in though and falls rather flat.

There's a chance that the yucks in "Vampires Suck" may be a bit more potent if you're familiar with the films that they're making fun of. There's also a strong chance that if you are familiar with the source, you may be on the verge of a murderous rampage at the thought of a "Twilight" parody. For those of us outside of those demographics targeted by the "Twilight(s)" of the world, "Vampires Suck" is nothing more than a sub par comedy that will only make you chuckle aloud a handful of times.