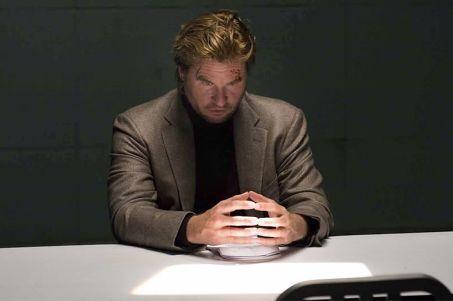 Jimmy's got issues. He's a smart guy with some pretty big ideas on the earth's future and global warning. As a matter of fact, he thinks the Mayan calendar and its predictions of the earth ending in 2012 are quite true. According to Jimmy, global warming will reach its zenith in December of 2012 with temperatures reaching upwards of 130 degrees worldwide. Along with the heat, he also believes that the human population will devolve into mass chaos as people go nuts with their impending doom. Jimmy's biggest problem is that nobody will listen. Taking matters into his own hands, Jimmy lures six strangers into unsuspecting doom as he locks them into a steam room and cranks up the heat to show just how bad humanity can break down under the extreme conditions of global warming.

Thrillers are often a mixed bag. At times they rely too heavily on twists and turns to keep the movie interesting and if your lead actors aren't up to holding a viewer's attention, the films can devolve into snoozers in a hurry. "The Chaos Experiment" itself fits this description too perfectly. Relying on current events generally can pan out okay; we all know global warming is a highly contested issue these days and it helps to ground the movie in reality. In many respects "Chaos Experiment" works will with this idea and the protagonists wishes and goals for the test but much of the film has some heavy faults that sadly weigh the film down before it ever gets going.

The biggest surprise is in the film's cast. Val Kilmer has his fans and his detractors and as of late, he hasn't had the best of reputations as a leading man. In "Chaos Experiment" he actually excels in his roll of the twitchy scientist on a mission. Throughout the film he does a pretty great job giving the subtle quirks of a troubled man. From random physical ticks to patented crazy eyes, he seems to mean well but you can tell that still water runs deep just by the look in his eyes.

The scenes of Kilmer facing off against the Detective Mancini, played by veteran actor Armand Assante, are down right riveting at times. The two play well together as they play a game of mental cat and mouse demanding attention and gluing us to the screen and hanging on the idea of what is going to come next. The problems arise however when the film steers itself away from these interrogation scenes and begins to introduce too many twists in a fairly simple plot. Everything then starts to fall apart as they begin to show the effects of Jimmy's experiment in action.

"Chaos Experiment" in many ways mirrors such films as "Saw". An elaborate setup trapping vastly different types of people in a room, pitting them against each other while the mastermind remains convinced there's some higher moral purpose to it all. While the film does not mimic the intricate traps of the "Saw" films or even the gore, it does harness the idea of the madman thinking he is doing good for society through his twisted experiment. In concept, the idea was okay. In execution, these scenes of our six innocents trapped in a steam room prove to be amongst the worst scenes in the movie.

Our six test subjects seem simple enough when first introduced. All seemingly normal people being lured in by the idea of a dating game, the only known quantity among them being B-Movie stalwart Eric Roberts. As the heat begins to rise, they all break into the worst stereotypical break downs, ratcheting up from normal to over the top in a matter of minutes. Instead of feeling sorry for any of them, we quickly become annoyed by the antics of the Bronx Italian mafia wannabe. The bitchy girl, we're happy to see her go as she continues to shriek at everybody for no real reason. The quiet and whiny one starts to bitch incessantly. Eric Roberts, while he holds his own has very little work with or to play off of leaving him just as stereotypical as the rest. Instead of proving itself to be a pivotal second act to work from, our tortured test patients do nothing but annoy.

For watchability, thankfully the movie cuts back and forth between the good scenes of Kilmer vs. Assante and the whiny sextet in the steam room. While it does grow increasingly confusing as the film rolls on, this helps the film to keep an even pace. While the torture scenes may drag on endlessly, we are still willing to plod along to get back to the good scenes we know are coming. This only works for a time though as the third act grows to its thrilling climax... where the film throws out a twist with absolutely no build up and rushes through to the end credits in a matter of around three minutes altogether.

It's seldom these days that a film makes me angry but the end of "Chaos Experiment" is flat out frustrating. Sure, the twist makes sense and you can start to see the signs of what's to come, yet there is no closure. Much like a teenager on his first date at the drive in, the twist is there and gone before you realize it is over. Sure, some films tend to overplay these endings but you still need a bit of closure to wrap it up. In this movie, it seems that even the filmmakers were confused as they actually used a 'The End' closing to let us know it was over. Sure it could work, but after the chore of the steam room scenes and the pleasant moments of the interrogation room, this ending is a let down and frustrating. An hour and a half of teasing with no finish.

"The Chaos Experiment" is a movie that could have been good. It had a handful of name actors involved who did their best to carry the film along. Misguided ideas of pain and suffering scenes led to a dragging second act and a disappointing ending leaves you feeling angry and cheated in a way that not even a shirtless Eric Roberts can help.

The Serpent and the Rainbow