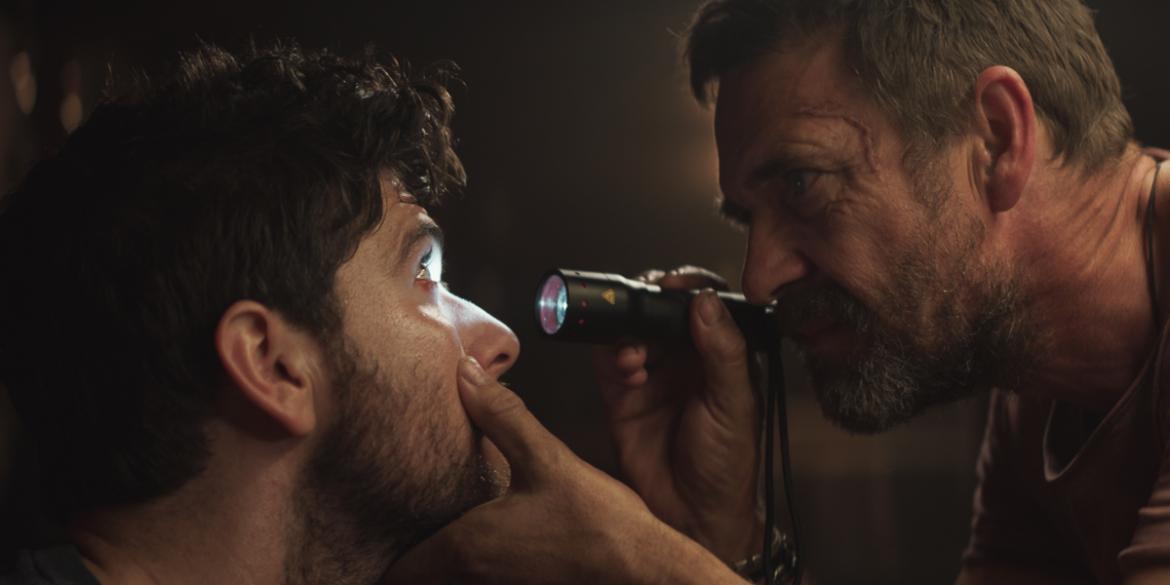 What better way to ring in growing pandemic anxieties than with a closed quarters thriller about a parasite infestation and the resulting fear and paranoia it causes? Sensational yet timely references aside, Neasa Hardiman’s claustrophobic, quasi-monster movie Sea Fever has more than enough sci-fi horror in its veins to earn comparisons to films like Alien and The Thing though it never quite plunders the same depths.

Sea Fever stars Hermione Corfield as Siobhán, a grad student boarding a fishing trawler to study any abnormalities in the crew’s catch. When the ship’s captain purposefully steers the vessel into an exclusion zone they mysteriously grind to a halt. Siobhán finds that an ominous squid-like creature has latched onto the ship, its tentacles compromising the hull’s integrity. Eventually the creature lets them go, but the crew suddenly finds themselves in a fight with paranoia at sea when some begin falling fatally ill with an unknown parasite. As tensions mount they have to decide what they’re willing to sacrifice to make it home safely.

While not winning many points with narrative creativity, Sea Fever’s goodwill is entirely earned in what it accomplishes with so little. The film gives you the air tight claustrophobia and paranoia of some of science fiction’s greatest hits with what is very likely a much leaner budget. The film achieves ominous chills in its brief glimpses of the mysterious, luminous creature lurking in the depths, and squirmy body horror stemming from the presence of the parasitic goo left behind in its wake.

Neasa Hardiman’s direction makes use of the ship's tight corridors and amenities to maximum effect. The sound design provides plenty of creepy ambient tones that place the audience right in the shoes of the crew as they battle a sense of isolation amongst a completely different panic. Hardiman’s script doesn’t delve too deep into each character, but the surface she scrapes is deeper than your typical horror fair, and more than enough to feel the gravity of the predicament the characters are facing.

Hardiman shows tremendous restraint in the escalation of horror and paranoia. There’s a palpable crescendo in the desperation aboard the ship, but the direction stays level headed and so do the characters even as the stakes increase. The film keenly sidesteps the temptation to escalate it’s characters’ emotions, leaning on a more naturalistic approach rather than heightened melodrama. The performances and subtle oddities in behaviors from slowly going mad at sea are some of the most profound and interesting aspects of Sea Fever, second only to a glowing tentacled monster seen in glimpses.

Sea Fever dazzles with a sense of intrigue and wonder. The scope of the newly discovered creature lurking out in fishing waters is never lost. Neasa Hardiman‘s film is impressive in its ability to pay homage to sci-fi heavy hitters without feeling like it’s just trying to rip them off in order to be mentioned in the same breath. Sea Fever burrows stealthily beneath your skin and before you know it the film has successfully infected you with it’s compelling and slimy tale of horror at sea.