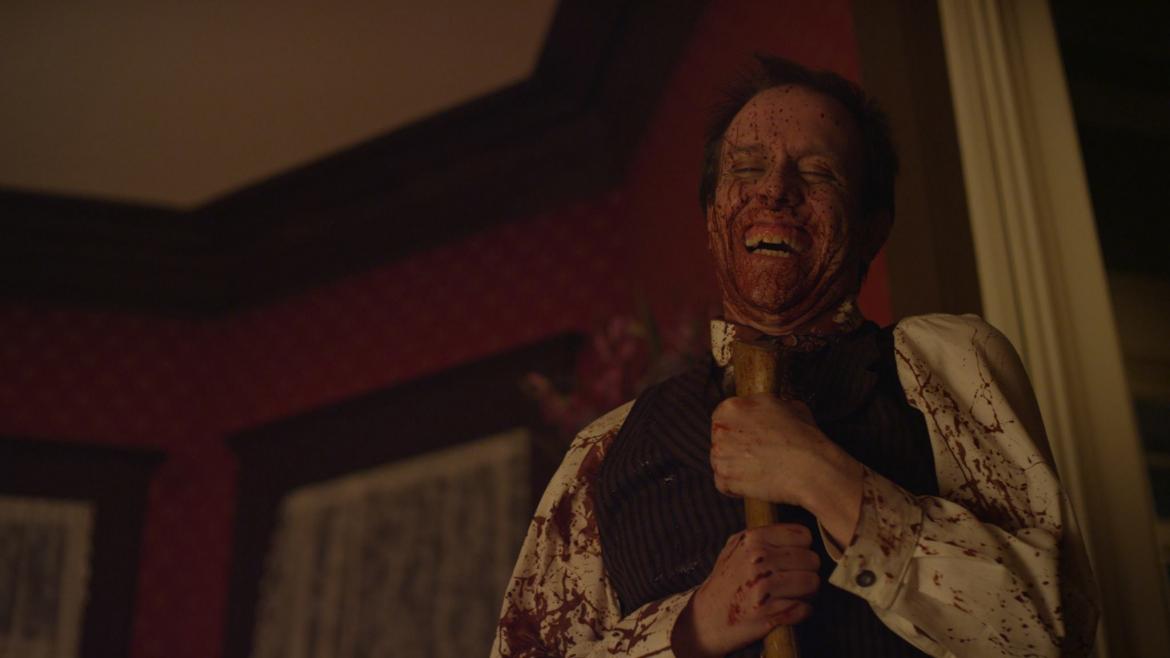 There’s something to be said for The Axe Murders of Villisca, a spook show that blends the camp of Ghost Hunters with the groans of every Amityville sequel, prequel, and remake into a feel good empowerment story about conquering your deepest, darkest fears and finding friends for life in the process. It has the humor of Daddy Day Care, but frequently scrambles to achieve scares with its half-baked premise too temperamental and afraid of its own shadow to pack a punch. But it…tried?

Caleb (Robert Adamson) and Denny (Jarrett Sleeper), two long time friends, live in a back-peddling, Midwestern town, where the most exciting thing that happens is discovering Denny underneath the high school bleachers with a random dude. The two host a YouTube ghost hunting show (with a whopping 72 viewers!), and are looking to film their next haunting. They lay their sights on The Axe Murders of Villisca – a factual murder house in Iowa where eight people were slaughtered in 1912. The murderer was never caught, but Caleb and Denny are convinced that a night in the house – along with Caleb’s love interest and outsider, Jess (Alex Frnka) – will unveil some on-camera action of the spirits that can reveal the murderer’s identity.

For a lean running time of 77 minutes, The Axe Murders of Villisca makes its audience wait far too long to explore any ideas the script set up. It’s clear from the start that the film is rarely interested in anything but its characters, which is a commendable facet most paranormal films are missing. There are some intriguing elements involving past trauma that later come into play in the third act and could have given the film layers of depth. But the film overstretches it characterizations with poorly timed intercuts and flashbacks, which are ultimately woven into the spiritual power of the house, and explained in a flimsy throwaway line at the climax. Stakes are never given a chance to be developed, and sadly, much of the resolution is undeserved and illogical. There’s even a moment slightly reminiscent of when Tom Cruise screamed Annabelle Wallis back to life in The Mummy.

While performances generally range from flat to over the top, it’s hard to blame the actors when the material they’re given fails to resonate on any emotional or thrilling level. Efforts to construct moments of horror felt like amateur escapades, as makeup and special effects are completely shrouded in darkness, and scenes intending to elicit jump scares are telegraphed in advance. Because what else can you expect the school bullies to do when they see that a rag-tag group of misfits Instagram a picture of themselves, tagged in a house they just broke into in a ghost town miles from any highway or safety?

The Axe Murders of Villisca is great if you’re looking to add to your collection of movies based on factual murders, if only for checking a title of that list. It’s a great example of how something inventive can easily snowball into an illogical mishap when you try to reinvent the wheel without even knowing what the wheel originally looked like. Still…points for trying?

You can find me at the intersection of Cormac McCarthy and RuPaul's Drag Race.